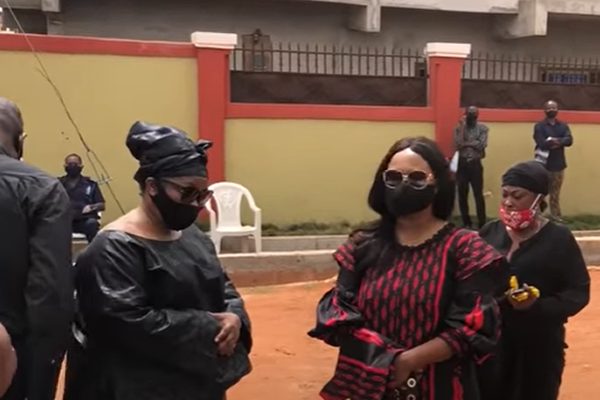 Some actors in Ghana did not let Saturday, May 9, pass without paying their respects to late actor Bernard Nyarko at his one-week memorial.

Nana Ama Mcbrown could not hold her tears when she sat in front of Bernard Nyarko’s mother to pay her respects.

Vivian Jill Lawrence seemed like she could hold herself, she burst into tears when she saw the mother of the late actor who had been crying.

Other Kumawood actors also visited Bernard Nyarko’s home in Kumasi where another one-week memorial was also being held.

Maame Serwaa at the one week celebration of Bishop Bernard Nyarko

Actor Bishop Bernard Nyarko passed away on Saturday, May 2.

According to his brother, Isaac Darko his brother died a natural death, debunking rumours that he had died under strange circumstances.

Admittedly, he said, Bernard Nyarko has not been well for some weeks prior to his demise.

“We took him to Ridge Hospital where he died around 5:30 pm on May 2. I will urge his fans to not believe everything [they read about him] online except that he died a natural death,” Mr Darko added.

DISCLAIMER: The Views, Comments, Opinions, Contributions and Statements made by Readers and Contributors on this platform do not necessarily represent the views or policy of Multimedia Group Limited.
Tags:
Bernard Nyarko
Christian Awuni
Nana Ama McBrown