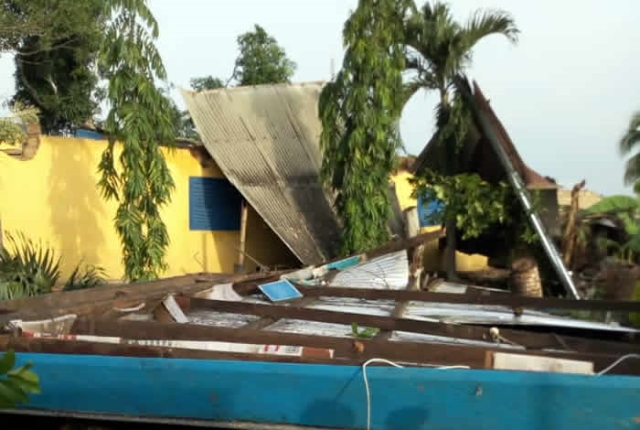 Member of Parliament for Twifo Hemang Lower Denkyira, Bright Wereko Brobbey, has appealed for support for his constituents after a rainstorm displaced hundreds.

He wants the public to support the effort by the National Disaster Management Organisation (NADMO) to resettle victims of the destruction caused by the heavy downpour last Sunday.

The late evening downpour in the Central Region communities was accompanied by strong and caused extensive damage to property running into several thousands cedis.

At least 21 persons were injured and many school buildings were destroyed in the 30-minute rainstorm.

Even though the National Disaster Management Organisation (NADMO) has been to the community to undertake an assessment, the Legislator says the affected residents will need some support from the public towards their recovery.

In an interview with Joy New’s Richard Kwadwo Nyarko, the MP said initial assessment reveals over 200 homes have been hit severely.

“It is such a disaster that our community has never known. Schools have been shut down because they were badly affected. We are looking forward to any form of support from well-meaning Ghanaians,” he appealed.

Richard reports that affected schools in Twifo Heman are yet to resume classes after the rainstorm.

“Not only has the situation made hundreds homeless, but many are yet to recover from the hospital after sustaining injuries,“ he narrated.

The Twifo Hemang Lower Denkyira Legislator said he is in touch with NADMO to fast-track support for the affected residents.

“NADMO has done its assessment and they have forwarded it to the National Headquarters.  I will do a follow up to as a matter of urgency seek support for the victims. My people are broken,” he said.

Mr Wereko Brobbey, who is also the Deputy Minister of Employment and Labour Relations, has urged the affected communities to go back to the days when trees are planted at the backyard of everybody.

“This will serve as wind breaks to avert calamities,” he assured.