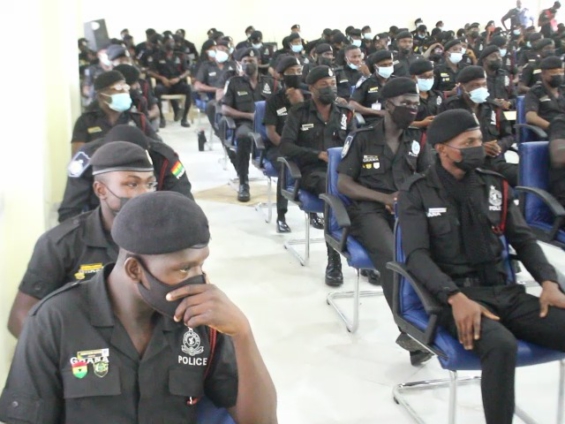 The Ghana Police Service has begun increasing its strength with the deployment of new recruits to the various regions across the country.

The service says, this is to increase police visibility in the country and that would, ultimately, help in crime-fighting.
Central Regional Police Commander, DCOP Habiba Twumasi Sarpong, at a ceremony to deploy the 149 new recruits to their duty post in the Central Region, assured residents in the region to feel secured because the police are on top of their game.

Not long ago, Kasoa became a hotbed of security issues and the police in the region responded to the situation by putting in measures.

The Regional Police commander believes the arrival of the new recruits is a greater demonstration of the police administration’s commitment to fighting crime.

DCOP Habiba Twumasi Sarpong indicated the police administration would continue to increase their numbers to ensure proper visibility which would translate into crime-fighting.

She said: “Because of the Kasoa incident and the varied happenings there, we developed some strategies to help stem the tide. We pushed more personnel to Kasoa to make sure we increased our patrols, the snap checks and the turn cities. And these have made us very visible and some of these recruits would be pushed there to augment what we have on the ground.”

Mrs Habiba Twumasi Sarpong further added, her administration would continue to cherish the information residents give them. These, she believes has helped and would help in fighting crimes in Ghanaian society.

Central Region Minister, Justina Marigold Assan urged the police recruits to exhibit professionalism in their line of work. She stressed the Regional Coordinating Council would support them every step of the way to ensure that they carry out their duties with finesse.

She expressed excitedly: “As the head of the Regional Security Council, I am extremely excited that these numbers have come to augment the number of personnel we have in the region already. If nothing at all, this will increase police visibility in our communities.”

The recruits were dispatched to their districts after undergoing educational, professional and practical training sessions to add to what they have already learnt at the training school.