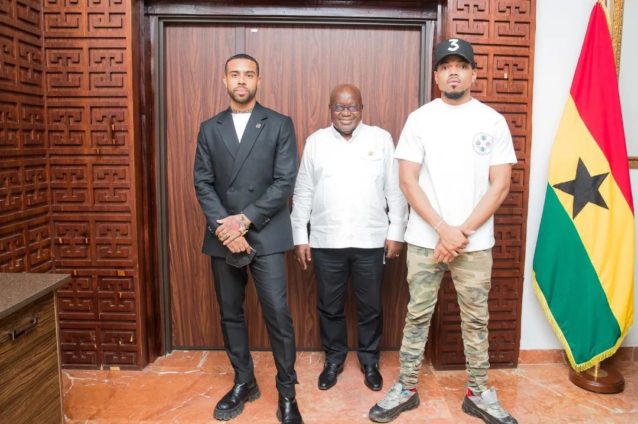 It seems Chance The Rapper did not only come to Ghana to explore the country and make friends but to also engage in dialogues that could see the possible strengthening of the relationship between Ghana and the diaspora.

The rapper earlier in the week met with President Akufo-Addo at the Jubilee House. He visited the seat of government with his friend and colleague, Vic Mensa.

Also present at the meeting was YouTube creator and TEDx Speaker, Ivy Prosper and some members from the Beyond The Return team.

Since arriving in the country, the award-winning musician has been spotted at numerous sites and events.

Chance The Rapper also posted some photos he took outside the Jubilee House.

Chance The Rapper got the nation talking when he was cited at a church on Sunday (January 9) morning.

According to a post on Instagram, the church where he worshipped was built by his family years ago. He also revealed that his family has also built a school in Jamestown.

ChanceTheRapper (@chancetherapper) visits church which his family built in Ghana 🇬🇭. He has been seen on social media listening to a sermon on Sunday from one Bishop Nkansah, whom Twitter seems to have taken a hearty interest in… lolx. pic.twitter.com/852UzIESCR

Chance The Rapper later linked up with Sarkodie. The two were seen hanging out in a studio.

DISCLAIMER: The Views, Comments, Opinions, Contributions and Statements made by Readers and Contributors on this platform do not necessarily represent the views or policy of Multimedia Group Limited.
Tags:
Chance The Rapper
Jubilee House
President Akufo-Addo
Vic Mensa