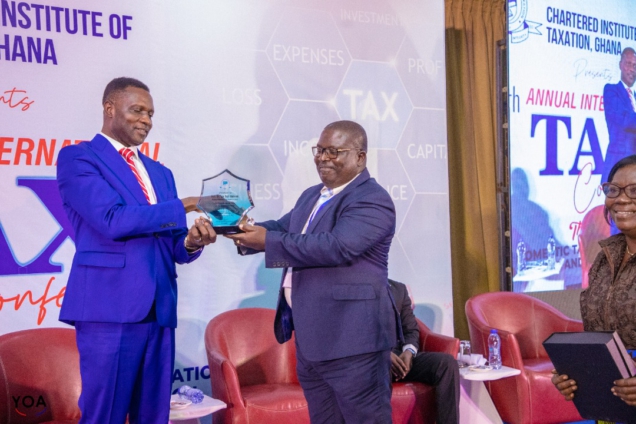 The Minister for Education, Dr Yaw Osei Adutwum has been honoured by two institutions in the country within one week for his role in the transformation of the country through education.

The first honour was by the Chartered Institute of Taxation, Ghana (CITG) for his support toward the development of the Institute.

It was also in recognition of his vision and the role he has been playing in the transformation of the country through education.

The award was presented to Dr Adutwum on Thursday, by the President of CITG, Mr George Ohene Kwatia, when he delivered a speech as part of the 10th annual International Tax 2022 conference held in Accra.

The three-day International conference brought together Tax experts from across the country and abroad to take stock of the past year’s activities, discuss gains made and look at other issues relating to taxation.

On Friday, the Student Representative Council (SRC) of the University of Ghana also presented a citation to the Minister for his dedication and support for the transformation of the education sector in the country.

The SRC citation was read by the Vice Chancellor of the University, Prof. Nana Aba Ampiah Ampofo, during the Security and Conflict Resolution conference organized by the Student’s Representative Council of the University.

Dr Adutwum in his response thanked the two institutions for the honour done him and pledged to continue working very hard to turn the fortunes of the country around.

The Education Minister who is also the Member of Parliament for Bosomtwe was upbeat that with the level of investment being made by President Akufo-Addo’s government in the education sector, there is no way the sector would not develop.