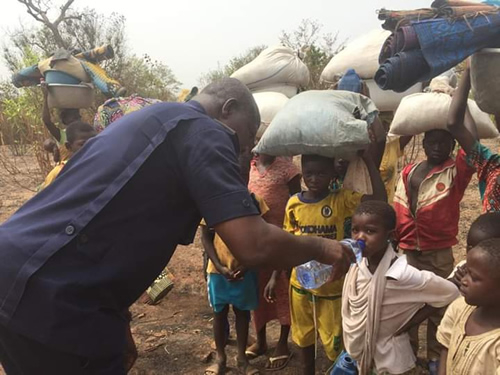 The renewed conflict the Chereponi district could worsen soon if police are not adequately resourced to deal with the fluid security situation, two security analysts have warned.

Security Analyst, Adam Bonaa and National Network Coordinator at the West Africa Network for Peacebuilding (WANEP), Albert Yelyang, want an appeal by the police for logistics to be granted swiftly before the conflict, which is breaking into neighbouring towns, becomes full blown.

Police on Tuesday appealed for logistics such as motorbikes to access remote parts of the district where gunmen wreak havoc on residents, mostly women and children.

The renewed clashes between Konkombas and Chokosis in the conflict-prone Chereponi in the North East Region have displaced some 1, 860 residents, according to the National Disaster Management Organisation (NADMO) estimates.

Image: Chereponi District Police Commander, Chief Spt. Henry Amankwatia, helps one of the displaced children to take a sip of water he was carrying.

Displaced persons, he said “are currently camped in private houses and church halls in the Yunyoo district. In Gushegu, the fight is not going on there but we have a camp there, which was used the last time the conflict broke.”

It is not clear what triggered the latest conflict which broke last week, but the Konkombas and Chokosis tribes have frequently waged war against each other over a small piece of land in the poverty-stricken Chereponi district.

Speaking on current affairs programme, PM Express, on Tuesday, Mr Yelyang said evidence of active gunfire in the night in the district points to a worsening situation.

He said he has seen videos of the latest conflict in which many rounds of bullets have been fired at night.

Also speaking on PM Express, Adam Bonaa said the public appeal by the police for logistical support to deal with the situation was “very unusual”.

“It means they are overstretched. It just tells you how under-resourced they are and coupled with the humanitarian crisis staring at them…if they don’t speak up someone is going to blame them for not calling for additional resource,” he said.

He wants President Addo Dankwa Akufo-Addo to make a public statement on the matter to reassure the troubled residents.

“The rate at which [the conflict] is spreading could develop into something else if the Executive doesn’t speak and probably garner all the resources we can,” he warned.

Watch more from the PM Express discussion in the video below.