China’s population falls for the first time since 1961 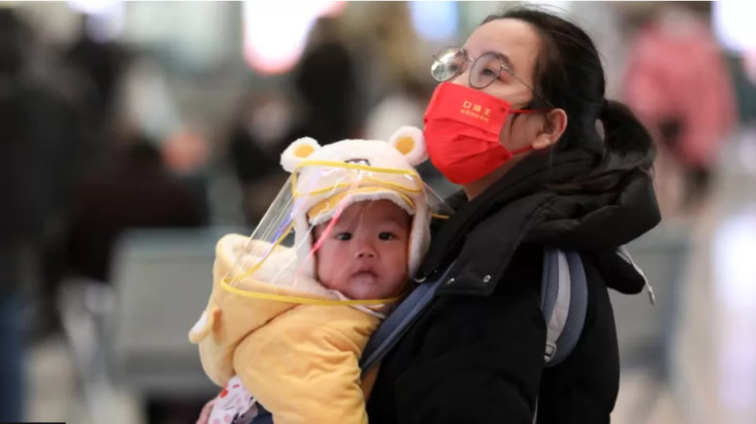 China’s population has fallen for the first time in 60 years, with the national birth rate hitting a record low – 6.77 births per 1,000 people.

China’s birth rate has been declining for years, prompting a slew of policies to slow the trend.

But seven years after scrapping the one-child policy, it has entered what one official described as an “era of negative population growth”.

The birth rate in 2022 was also down from 7.52 in 2021, according to China’s National Bureau of Statistics, which released the figures on Tuesday.

Deaths also outnumbered births for the first time last year. China logged its highest death rate since 1976 – 7.37 deaths per 1,000 people, up from 7.18 the previous year.

Earlier government data had heralded a demographic crisis, which would in the long run shrink China’s labour force and increase the burden on healthcare and other social security costs.

Results from a once-a-decade census announced in 2021 showed China’s population growing at its slowest pace in decades. Populations are also shrinking and ageing in other East Asian countries, such as Japan and South Korea.

“This trend is going to continue and perhaps worsen after Covid,” says Yue Su, principal economist at the Economist Intelligence Unit. Ms Su is among experts who expect China’s population to shrink further through 2023.

“The high youth unemployment rate and weaknesses in income expectations could delay marriage and childbirth plans further, dragging down the number of newborns,” she added.

And the death rate in 2023 is likely be higher than what it was pre-pandemic due to Covid infections, she said. China has seen a surge of cases since it abandoned its zero-Covid policy last month.

China’s population trends over the years have been largely shaped by the controversial one-child policy, which was introduced in 1979 to slow population growth.

Families that violated the rules were fined and in some cases, even lost jobs. In a culture that historically favours boys over girls, the policy had also led to forced abortions and a reportedly skewed gender ratio from the 1980s.

The policy was scrapped in 2016 and married couples were allowed to have two children. In recent years, the Chinese government also offered tax breaks and better maternal healthcare, among other incentives, to reverse, or at least slow, the falling birth rate.

But these policies did not lead to a sustained increase in the births. Some experts say this is because policies that encouraged childbirth were not accompanied by efforts to ease the burden of childcare, such as more help for working mothers or access to education.

In October 2022, Chinese President Xi Jinping made boosting birth rates a priority. Mr Xi said in a once-in-five-year Communist Party Congress in Beijing that his government will “pursue a proactive national strategy” in response to the country’s ageing population.

Apart from dishing out incentives to have children, China should also improve gender equality in households and workplaces, said Bussarawan Teerawichitchainan, director of the National University of Singapore’s Centre for Family and Population Research.

Scandinavian countries have shown that such moves can improve fertility rates, she added.

“They are not in a doomsday scenario right away,” says Paul Cheung, Singapore’s former chief statistician, adding that China has “plenty of manpower” and “a lot of lead time” to manage the demographic challenge.

“Boosting fertility is not going to improve productivity or increase domestic consumption in the medium term,” said Stuart Gietel-Basten, a public policy professor at The Hong Kong University of Science and Technology. “How China will respond to these structural issues would be more crucial.”

DISCLAIMER: The Views, Comments, Opinions, Contributions and Statements made by Readers and Contributors on this platform do not necessarily represent the views or policy of Multimedia Group Limited.
Tags:
China
Population