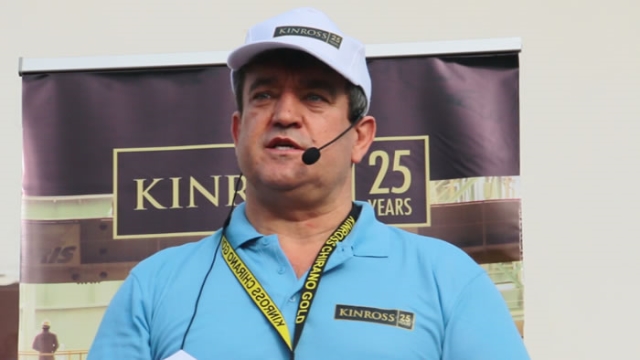 Management of Chirano Gold Mine has reiterated their commitment to improving the standard of living of people living in communities in the catchment area of the mine.

Vice President and General Manager, Adriano Sobreira, says one of the company’s core values is ‘putting people first’ and hence will seek to deepen corporation with local communities.

He believes this will consolidate existing cordial relations and ensure that corporate social responsibility projects are geared towards what the communities actually need.

Speaking at a staff durbar to mark the 25th anniversary of the mother company of Chirano, Kinross, Mr Sobreira revealed Chirano has been very upfront in the delivery of infrastructure and social intervention programs to local communities.

According to him Chirano has built schools, provided water treatment systems for communities,  and CHIP compounds.

The company has also trained people in local communities in employable skills, some of whom have been engaged by Chirano Mine.

In line with governments drive to get mining companies to engage local contractors, Chirano Gold Mine has emphasized the need to build the capacity of indigenous companies to facilitate adherence to local content requirement.

Mr Sobreira says the company will continue on this path but added it is sometimes difficult to source some supplies and services in-country.

“I know it’s an area the government has committed to working hard with the Standards Authority to make sure that the local products and productions are of high quality so that we [mining companies] can ensure we buy local.

Chirano Gold Mine came second for adhering to local content requirements at the last mining awards.

The company currently retains 60 per cent of profits in Ghana.

“Consistently we make sure we look at how we can help the local community to be able to do business with CHIRANO.

We pride ourselves that we make sure that whenever we can we buy local making sure that the local suppliers which help us in areas they have capacity in Ghana.”

The company prioritizes competitive, local companies especially in the catchment area of the mine when awarding contracts, as a result, it currently has over 50 local businesses involved in various contracts.

Chirano Gold Mine has adopted quarterly meetings with community stakeholders as a strategy to foster cordial relations with the communities within it operate.

The mining firm says this has prevented agitations between the company and surrounding communities.

President Akufo Addo at the 12th West African Mining and Power Conference, lamented poor state of communities where mining companies operate in Ghana is disgraceful. According to him, these communities are impoverished and have not gained their fair share of development even though they sit on wealth.

The General Manager of Chirano Mines says the company over the years has adopted a strategy of consistent community engagement to address the needs of local communities.

A Community Consultative Committee (CCC) comprising local paramountcies, heads of government agencies and other stakeholders meet on regular basis to direct where resources allocated to communities can best be spent to the benefit of the people.

Human Resource and Community Relations Manager, Thomas Nyarko-Danquah, says the continuous interaction has created a bond and a better relationship between the parties.

“First, we approach what we do with an attitude of respect for the people, laws and cultures where we do business. At Kinross, we are committed to responsible mining. It means that we are looking to generate sustainable and long-term benefits for the communities which host us. Most of the workers are coming or living around the mine”.

There are several programs implemented to concretely improve the life of people in villages surrounding the mine.

-Malaria control program has reduced the incidence of malaria in local communities by over 80 per cent;

-Between 2014 and 2017, Chirano partnered Project C.U.R.E to provide 9 containers worth of medical supplies and equipment to 24 local health facilities;

Kinross, which currently has 8 mining operations around the world, including the Chirano Mines, started operations in 1993, producing approximately 226 kilograms or 80,000 gold equivalent ounces.

Kinross is a reputable gold mining company with a diverse portfolio of mines in projects in Ghana, Mauritania, Brazil, Chile, Russia and the United States and is the World’s fifth largest gold producer.

The company has a workforce of 9,000 people and produces an average of 7 tons or 2.5 million gold equivalent ounces per year.

The Chirano mine, which KINROSS acquired in 2010, is an important mine for the Company and has consistently contributed to its overall business performance, helping maintain its status as a senior gold mining Company. Chirano has produced about 2 million ounces of gold since the operation began.

“Kinross is a success story thanks to our skilled, hardworking and dedicated employees.”