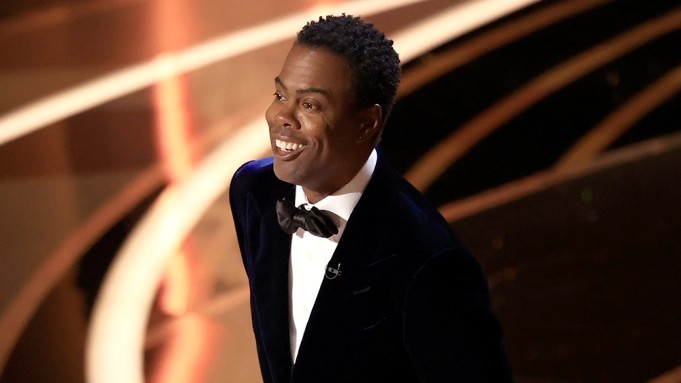 Don’t expect Chris Rock to be emceeing the Oscars anytime soon. According to multiple eyewitnesses, Rock revealed during his Sunday night show in Phoenix, that he was asked to host next year’s show, but refused.

As many will remember, it was at the 2022 Academy Awards that Will Smith slapped Rock in the face after he made a joke about Jada Pinkett Smith before presenting the award for Best Documentary Feature.

“Chris Rock said he was asked to host next year’s Academy Awards at his Sunday night show at Arizona Financial Theatre, and that he refused the offer,” one eyewitness shared. “He also noted that he was offered the chance to do a Super Bowl commercial that he also declined.”

The eyewitness also told ET that Rock compared hosting the Oscars to returning to the scene of a crime, referencing the murder trial of O.J. Simpson, who was accused of killing his wife, Nicole Brown Simpson.

“Chris joked that returning to the Oscars would be like returning to the scene of the crime and said that it would be similar to asking Nicole Brown Simpson to go back to the Italian restaurant where she left her glasses,” the eyewitness added.

He continued to make light of the incident, though he did admit that getting hit by Smith hurt, a lot more than words do. Calling Smith “Suge Smith,” another eyewitness said Rock talked about the incident for “a few minutes in a joking way” but kept his references to it “short and classy.”

While Rock spoke about the incident during his show, eyewitnesses told ET that Rock has no plans to speak to “any big outlet” or do a “sit down interview” to speak about what happened.

“Chris also said he will never do a sit down interview with anyone, like Oprah or any big outlet, and complain or speak about what happened, because he will never be a victim,” a separate eyewitness added.

On July 29, Smith shared a deeply personal video message to social media in which he apologized to Rock and the comedian’s family, as well as his own family and friends, for the now-infamous Oscars slap scandal.

He also revealed that he had reached out to Rock. However, “the message that came back,” Smith said, was that the comedian was not ready to talk and would reach out when he is.

It seems like Smith may be waiting a while, with a source telling ET following Smith’s apology, that Rock has no plans to speak with the King Richard star.

The source said that Smith would love nothing more than for Rock to publicly accept his apology, but Smith will have to wait on it.

“Chris has no plans to reach out to Will,” said the source, who also believes that the timing of the apology is more for Smith’s best interest. “He needs the public’s forgiveness, not Chris’.”

While Rock is hitting the stage for his ongoing comedy tour, the awards show stage is not one he’s ready to step back on. In fact, this isn’t the first awards show opportunity Rock has turned down. Last month, ET learned that the comedian declined an offer to host the 2022 Emmy Awards.

The source revealed that Rock was approached to host this year’s Emmy’s but turned down the job. “He’s in the middle of his tour and is preparing for the taping of his comedy special, which will be taping this fall,” the source said.

But that’s not all. The source added that Rock is “over” Hollywood and is hoping to travel and lie low after his comedy tour.

DISCLAIMER: The Views, Comments, Opinions, Contributions and Statements made by Readers and Contributors on this platform do not necessarily represent the views or policy of Multimedia Group Limited.
Tags:
Chris Rock
Oscars
Will Smith