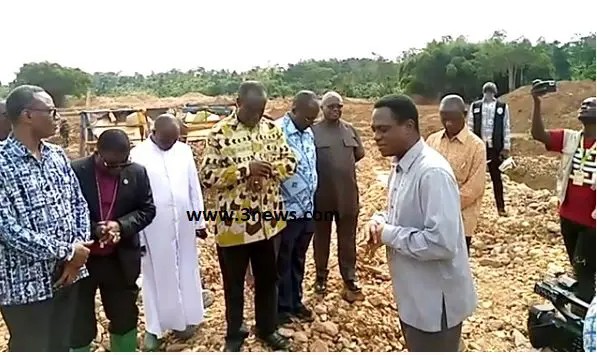 The Christian Council of Ghana has called for an immediate presidential ban of small-scale mining, despite its contribution to the economy of the country.

It believes this will augment the fight against the illegal mining menace in the country to save future generations.

The demand by the Christian Council comes after its recent tour of some illegal mining sites in the Eastern Region revealed that some people are mining in their rooms.

“Some people have their homes built in such a way that in one their rooms, they can take a ladder and go down [to mine]. The honourable minister explained to us that small-scale mining actually brings a lot of money into our GDP and we are actually grateful to God for that.

But the fact of the matter is that now we cannot tell whether those who are doing it legally have turned to be illegal [and] we don’t know which one is ‘galamsey’ and so on,” Chairman of the Council, Rev Prof Joseph Obiri Yeboah Mante said.

At a courtesy call on President Akufo-Addo at the Jubilee House, Prof Mante added that the country must take a firm stand against the practice.

“We are just wondering whether it would be possible to put a ban on all small-scale mining. We know we get money [from it] but at what cost?” he asked.

President Akufo-Addo is, however, happy with the sustained discussion on illegal mining.

He said government will not relent in its effort to clamp down on the menace.

“I am happy that in my time, this issue of galamsey has gripped the nation and now we are talking about it. The time when it went out of hand, we should have talked; we were quiet about it.

But I think today the public discourse, the public consciousness have now been fully aroused as to the dangers that this development poses to our growth, to our country’s progress…and that, for me, is the source of satisfaction; the determination to make it  priority,” he stated.

The Ghana National Association of Small Scale Miners has questioned the rationale behind a call by the Christian Council of Ghana for the government to place a ban on small-scale mining.

The group says the Christian leaders were insensitive in their call since illegal mining is not practiced by all miners.

It adds that the proposition will be a lazy man’s approach to dealing with the challenge.

The General Secretary of the Association, Godwin Armah, says such an action will render over six million people jobless and threaten national security.

The small scale miners say it will be unfair to ban their activities because they do not have licenses to mine in forest reserves and close to water bodies.

The Association says it is ready to work with the government and other stakeholders to sanitize the industry.

The Association has also proposed a restriction on the importation and use of Chanfang engines, which will make it difficult to dredge water bodies.

DISCLAIMER: The Views, Comments, Opinions, Contributions and Statements made by Readers and Contributors on this platform do not necessarily represent the views or policy of Multimedia Group Limited.
Tags:
Christian Council of Ghana (CCG)
Galamsey
Illegal mining
President Akufo-Addo
Small-scale mining