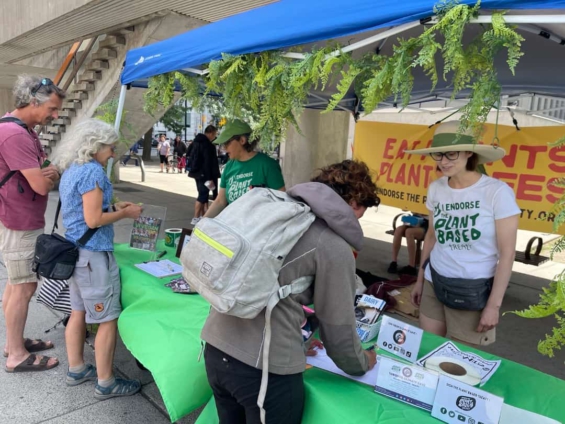 Climate activists are distributing hundreds of packets of vegetable and herb seeds in front of city halls to inspire people to connect with, cultivate their own food, enhance access to healthy and sustainable food.

The campaigners are urging town and city councils to support the Plant Based Treaty to combat emissions from animal agriculture and related deforestation, which are major contributors to the climate emergency.

To commemorate the one-year anniversary of the Plant Based Treaty’s inception, 100+ cities around the world, including Toronto, Tel Aviv, Mexico City, Buenos Aires, Montevideo, Santiago, Lima, Los Angeles, Mumbai, Bristol, and Naples, are staging a global Seed the City Event.

According to Anita Krajnc of Plant Based Treaty, they will be providing hundreds of packets of kale, parsley, and other seeds for the community to plant in their own gardens or window sills as part of the worldwide Seed the City initiative.

“Plant Based Treaty campaigners are working with cities to advance food security and the accessibility of healthy plant-based foods, in order to promote the importance of mitigating the climate crisis by growing organic vegetables in community gardens and city orchards,” he explained.

Anita Krajnc remarked that by growing their own food, everyone can contribute to the solution and combat climate change.

Varun Virlan of Toronto Climate Save, who is attending today’s event, argues that people must reduce emissions from animal agriculture to avoid temperature rises exceeding 1.5 degrees Celsius, and that research analyzed by the IPCC suggests that a vegan diet is best for the earth.

“We urge cities around the world to follow available climate research, support the Plant Based Treaty, and prioritize plant-based food solutions in our climate action plan,” he said.

The Plant Based Treaty, which advocates for a move to a plant-based food system, has the support of 18 municipal governments around the world, including Buenos Aires, Rosario, and Boynton Beach, Florida.

Celebrity supporters of the treaty include Paul, Mary, and Stella McCartney, who stated in a joint statement that they believe in justice for animals, the environment, and humanity. As a result, they back the Plant Based Treaty and encourage individuals and countries to sign it.

Moby, an international recording artist, has also expressed his support, saying, “We face a climatic catastrophe, particularly a methane emergency.

“We face a climate catastrophe and especially a methane emergency. We can all make a difference. Fight climate change simply with diet change. So please join me and endorse and support the Plant Based Treaty.”

The Plant Based Treaty is modeled after the Non-Proliferation Treaty on Fossil Fuels and is influenced by conventions that have addressed issues such as ozone layer depletion.

The global movement is urging towns and cities to sign up for the Plant Based Treaty in order to put pressure on national governments to draft a global treaty that will stop the global spread of deforestation caused, encourage a plant-based food system and encourage public awareness initiatives about the health benefits of plant-based foods.

DISCLAIMER: The Views, Comments, Opinions, Contributions and Statements made by Readers and Contributors on this platform do not necessarily represent the views or policy of Multimedia Group Limited.
Tags:
Climate
Climate activists
herb seeds
vegetable