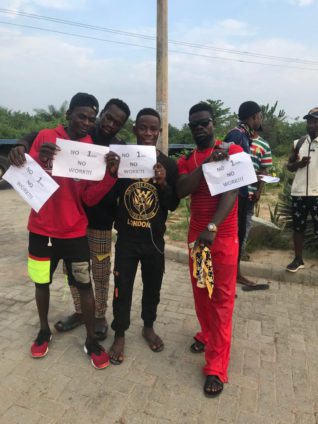 Cocoa carriers from the various warehouses of the Ghana Cocoa Board (COCOBOD) have begun an indefinite strike to demand for better service condition and increment in salary.

According to them who work under the Cocoa Marketing Company (CMC), there have been a freeze in pay rise for the past five years without any explanation from their managers.

The nationwide strike which is beginning on Wednesday 5th January, 2022 will affect the haulage of the commodity, since the cocoa trucks cannot be loaded to the ports for export.

One of the leaders of the Cocoa Carriers in Tema, Godwin Ocansey, told Joy Business the situation is bad as it has worsen their living conditions.

“From 4 to 5 years now, our salaries have not been increased for cocoa carriers. They’ve given us 62 pesewas for almost 4 years per bag until now they’ve not increased it. “

“There were buses that were picking us from our homes to the warehouses that’s the cocoa sheds. They’ve canceled that one too. What the workers are demanding for right now is either CMC pays them or increase the bag to ¢1. It’s either COCOBOD cancels contracts with contractors and pays the cocoa carriers direct or they increase the pay to ¢1 per bag”, he explained.

He further added that “this is all the cocoa carriers are demanding from the management of Cocoa Marketing Company and that today the strike begin and it shall continue till they listen to our petition”.