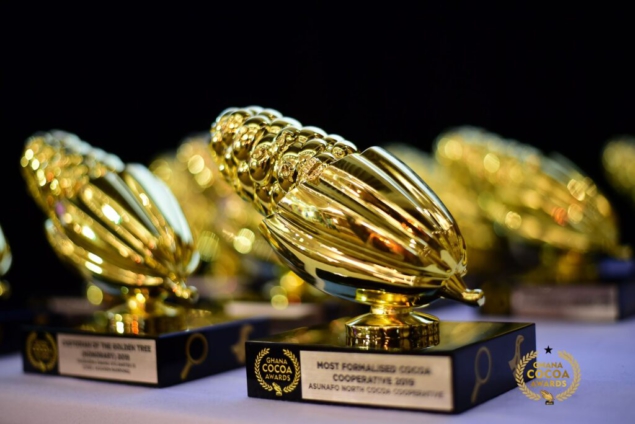 Ghana Cocoa Awards is an initiative instituted to appreciate and highlight outstanding achievements by personalities and organisations in the cocoa value chain.

More than thirty organisations and individuals stand to be confirmed as finalists in the competitive categories, whereas three other personalities will be accorded honorary awards.

A press release signed by the Executive Director of Cocoa Post, Kojo Hayford, said submission of nominations and entries is open from now till Friday 14th October 2022 via www.ghanacocoaawards.com/nominate.

According to the statement, about 3 dozen organisations and individuals were rewarded in competitive categories while three distinguished personalities were singled out for honourary recognition during the 2021 edition.

Others are Company, Business Leader and Entrepreneur of the Year categories, brands of the year, cocoa financing institution and insurance, Shipping, Lifetime Achievement and Woman of Excellence award categories.

Executive Director of Cocoa Post, Kojo Hayford said, “in spite of global supply chain challenges due to Covid19 and geopolitical events, the cocoa industry has demonstrated an appreciable level of resilience owing to the efforts by industry.”

“Ghana Cocoa Dinner offers the platform for leaders to take stock of the season gone by and share insights for the ensuing one while networking,” he added.

The Executive Director of Cocoa Post commended the sector regulator, Ghana Cocoa Board, for its unwavering quest to maintain quality standards along the value chain, the result of which is the production of the world acclaimed premium quality Ghana cocoa.

Cocoa is Ghana’s leading agro commodity export, and an integral pillar of the economy of the West African nation.

Outstanding upstream actors, mainly cocoa farmers, are awarded by Ghana Cocoa Board at the district, regional and national levels during the National Farmers Day awards.

The Ghana Cocoa Dinner initiative was created to serve as a networking platform for downstream players in the local cocoa industry and also recognise excellence among players, creating visibility for excellent leadership and success stories.