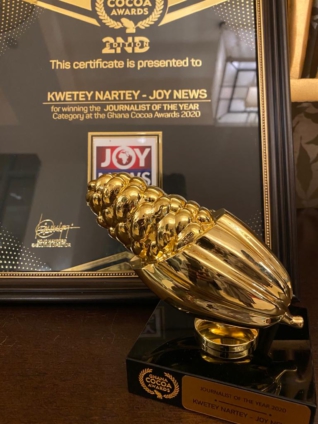 The Ghana Cocoa awards are basically in recognition of individuals as well as the collective roles they have played towards the sustenance of the Cocoa sector in Ghana over the years.

Kwetey Nartey had won the Journalist of the Year award due to his stellar journalistic contributions to the cocoa sector.

The first one ‘Missing Kilos’ which was premiered hit with a legal tussle eventually aired on JoyNews’ Hotline documentary early this year.

The documentary was produced in 2018 but was delayed in showing because the Produce Buying Companies (PBCs) placed an injunction on it.

It highlighted some challenges cocoa producers face in the country which includes the adjustment of scales by the PBCs.

COCOBOD reacted to the expose by procuring sealable cocoa weighing scales approved by the Standards Authority which would be distributed to all Licensed Cocoa Buyers at a cost.

His second documentary, “Robbing the Poor” uncovered how some Licensed Buying Companies and farmer society groups illegally rent their certification licenses to businessmen to enable them to export regular cocoa as certified ones.

It came to the fore that a certification license could be rented out for as high as a million cedis to businessmen.

However, in many cocoa growing areas across the country, there’s a blatant abuse of the system giving rise to a situation where some LBCs do not pay the appropriate premium and also pass regular cocoa as certified.

Following the showing of the documentary, the Ghana Cocoa Board immediately reviewed the implementation of the Cocoa Sustainability Programme to prevent abuse of the scheme.

Kwetey Nartey was among 42 people recognised for their contribution to the Cocoa sector at the 2020 Ghana Cocoa Awards.