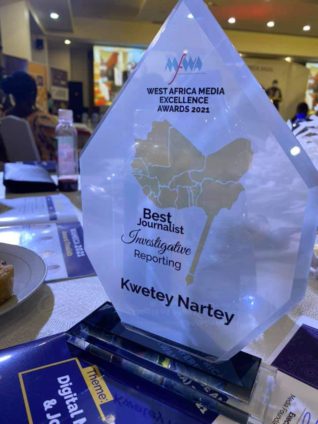 He won the Investigative Journalist of the Year award with his documentary ‘Robbing the Poor’ and the Overall Best Journalist for West Africa award.

The Overall Best Journalist Award was jointly won with a journalist from Nigeria.

Speaking at the event, the Investigative Journalist thanked God for the honour and his colleagues for their continuous support.

Recounting some of the tough times in his career, Kwetey Nartey said among other things, that he received death threats after the documentary was broadcast.

He recounted “one night I couldn’t sleep. So, I called my colleagues and we shared experiences on how to handle the psychological challenge I was going through. This award gives me the relief that as long as we seek to expose the ills of society, our work will be rewarded one day.”

A total of 711 entries were received for the 2021 West Africa Media Excellence Awards, from 14 countries in West Africa. The five-member jury, after a thorough review of the entries, shortlisted 21 finalists from five countries.