Cocobod concedes gaps in monitoring mechanisms may have led to use of children in cocoa farms - MyJoyOnline.com 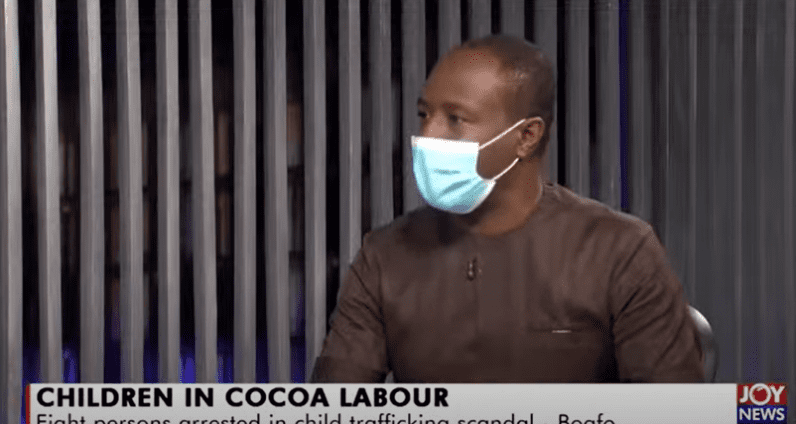 The Head of Public Affairs at the Ghana Cocoa Board, Fiifi Boafo has admitted that gaps in their monitoring mechanisms may have led to the use of children on farms by some deviant cocoa farmers.

His comment on Tuesday’s edition of PM Express comes after a JoyNews Hotline documentary revealed how farmers allowed children as young as ten, slave on their farms.

“I agree that yes, we are not able to identify every child in every community engaged in this act. But the truth is that this is also not an indication that it exists in every cocoa farm everywhere,” he explained.

“Our engagement with farmers is something that goes on, on daily basis. There may be signs and signals that gives you an indication that maybe, there’s something wrong happening somewhere and based on that, you take actions to remedy the situation.”

“Some of the farmers create the impression that well, ‘we are poor and do not have the resources and it’s a justification for using the children.’ It gives an indication that there is the need for us to improve on the education.”

Meanwhile, Chief Labour Officer at the Employment and Labour Ministry, Eugene Korletey has called for a concerted effort among institutions to eradicate the canker.

“The issue is a multi-faceted canker or menace and the need for collaboration and effective coordination is very important. The media has a major role to play because as industry is expanding, the coverage becomes difficult for the Department to reach out to every corner of the country.”

“When we get information from our major stakeholders, we’ll be able to reach out to some of these areas and ensure that there is sanity at the employment stage,” he said.