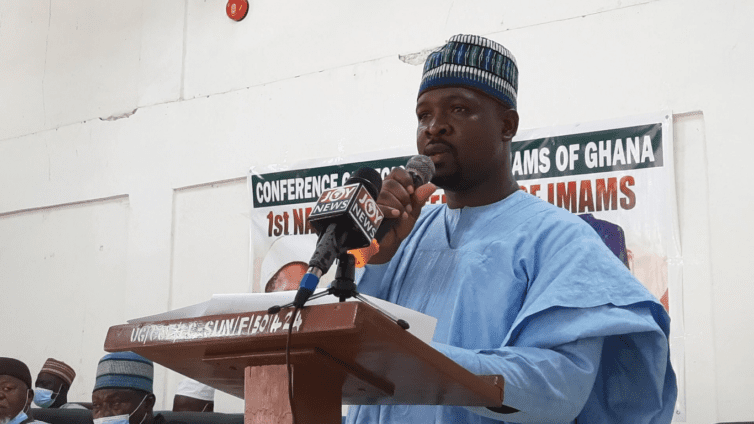 The ongoing debate on the 2022 budget statement and economic policy of the government has been characterized by controversies due to the split number of parliamentarians on both sides.

But the Conference of Regional Chief Imams has appealed to parliamentarians to resort to the use of dialogue and consensus-building during the debate of the budget.

In a communique at the end of a three-day conference in Sunyani, the Regional Imams want members from both sides of the parliament to deal with the issues during the debate in the interest of the nation.

The Conference, however, said they fully support the “Promotion of proper sexual rights and Ghanaian family values bill 2021” which is currently before parliament, and call for its passage to ensure sanctity in the communities.

The climax of the maiden conference under the theme, “The Role of Imams in Development”, was attended by all the 16 regional Imams, a team from the National Chief Imams office, some district Imams, the leadership of the National Council of Zongo Chiefs, leaders of the various Islamic sects, and the Bono Regional Minister, Justina Owusu Banahene.

The Conference aimed at recognizing the developing challenges facing the Muslim Ummah in Ghana, appreciating the potential in the Ummah to establish a framework of leadership and management of the affairs of Muslims in Ghana, accepting the diversity in the ranks of the Ummah, among others.

The 12 point communique, signed by Alhaji Sualah Abdallah Quandah, the Executive Secretary of the Conference of Regional Chief Imams said they would “continuously organize, review and reflect process to reach out to all segments of the Ummah to comprehensively document the developmental challenges across the board”.

It also said they would “Develop comprehensive organizational management and leadership structure for efficiency in managing the affairs of the Ummah”.

On resources, the conference would “Mobilize the enormous human and material resources in the communities through the Shura concept and establish transparent and accountable management of resources so mobilized”.

“Develop the capacity of Imams at all levels to lead and manage the affairs of the Ummah, and also build the capacity of leaders to appreciate that differences are natural and should not be the source of division, disunity, and antagonism”.

“To hold Regional Conferences to sensitize the District Chief Imams, the Leadership of the various Islamic organizations on the need for establishing District and Regional Shura Councils to consolidate unity and development among Muslims”, it said.

In education, the statement said, “The conference took particular notice of the challenges to quality teaching and learning in schools under the Islamic Education Unit, and resolved to take responsibility and interest in the schools at all levels”.

The Conference also resolved that the 2022 National Ramadan Conference will be held in Koforidua, the Eastern Regional Capital.

DISCLAIMER: The Views, Comments, Opinions, Contributions and Statements made by Readers and Contributors on this platform do not necessarily represent the views or policy of Multimedia Group Limited.
Tags:
Conference of Regional Chief Imams
consensus building
Members of Parliament