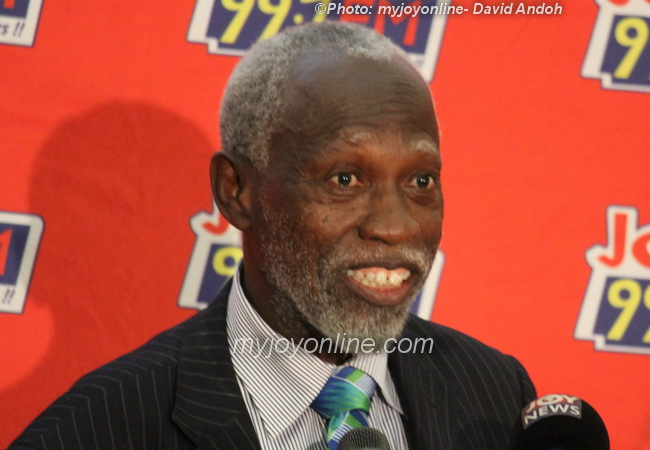 In a highly explosive commentary, former Rector of GIMPA, Professor Stephen Adei says eight out of 10 politicians are nothing more than ‘glorified thieves’.

He says he was shocked to have been told that parliamentarians in Ghana now need to be bribed before passing a law.

“Now if you want to parliament to pass anything else, not only do you go to the committee and bribe them….

“… but after they have gotten their share, they ask you where is our laptop in other words you have not made provision for their girlfriends”

He is facing a challenge to back his claims with evidence as he faces the prospect of being dragged before Parliament’s Privileges Committee.

The popular conference speaker was speaking to a Christian gathering where he sought to charge up his audience on the need for righteousness.

“It is a time that we must rise unless the righteous stand up and it is for us to lay down the foundation for the next generation”.

He asked his audience to train their children with the doctrines of the Christian faith to instill a strong conscience for righteousness.

“Statistics show that 80% of all people who will go to heaven make their decision for Jesus Christ before the age of 18 years”.

Early Christian training can cure corruption in Ghana when the next generation grow into adults, he said.

“If we do so we won’t have judges collect bribes to pervert justice”, the leadership guru then tore into the judicial scandal that has resulted in the suspension of some 34 magistrates, circuit court and high court judges.

Prof. Adei did not spare politicians in his call for righteousness.

“We won’t have politicians [collect bribes] who have been privileged to have every need of theirs met but at least eight in ten politicians are glorified thieves”.

Professor Stephen Adei suggested he is relishing the opportunity to watch an investigative video on parliament which is expected to expose scandalous practice among the legislators.

The video has reportedly been done by popular investigative journalist Anas Aremyaw Anas who also filmed the bribe-collecting judges as alleged.

Revealing the basis for his claim that politicians are corrupt, Prof Adei said he was shocked when a friend asked him:

“Stephen did you give bribe to parliament to pass GIMPA’s law?… I was shocked” he went on.

Prof. Stephen Adei is famed for his transformational leadership that turned around the fortunes of a struggling public service training, school, GIMPA, into a profitable tertiary institution in Ghana.

But some MPs have expressed disappointment with his comments.

“Prof. Adei does not understand how high he is held… he has done the nation a lot of disservice” with his comments, the Deputy Ranking Member of the Public Accounts Committee of Parliament, George Loh told Joy News.

The North Dayi MP who once led a campaign to drag a WHO scientist to parliament’s Privileges Committee said the Professor’s statement is “pregnant with falsehood”.

He has challenged the Professor to learn from Anas by presenting evidence to the relevant authorities such as the police.

He drew a line between Professor Stephen Adei’s comments and another controversial one made by now Majority Leader of Parliament Alban Bagbin.

In 2014, MP for Nadowli/Kaleo, Mr Alban S.K. Bagbin in a brutal confession told leaders of some NGOs, “The reality is that MPs are Ghanaians and there is evidence that some MPs take bribes and come to the floor and try to articulate the views of their sponsors.

“This is because in Ghana we have not developed what we call lobbying. There are rules; there are ethics regarding lobbying and we in Ghana think that lobbying is taking money, giving it to MPs and writing pieces for them to go articulate on the floor. That is bribery,” he said.

But according to the North Dayi MP, this is not bribery. He also believed Bagbin’s defence that his comments have been misinterpreted.

George Loh told Joy News, it is not part of MPs conditions of service to pay for his travel and accommodation for seminars organised by NGOs to lobby parliamentarians on upcoming bills.

“If an NGO takes a group of MP to a workshop, feeds them and pays for their accommodation I don’t think that it is bribery”.

The North Dayi MP nonetheless acknowledged that “Parliament is not heaven” and there is always the possibility that a parliamentarian will take a bribe.

“There can be corrupt people there, yes” he said.

In the controversy surrounding Alban Bagbin, the House later cleared the embattled MP after months of investigation into the allegations by a special committee.

But according to George Loh in the case of Stephen Adei, he will not be surprised if some MPs, zealous and jealous guardians of their reputation, drag the popular professor to Parliament citing him for contempt.