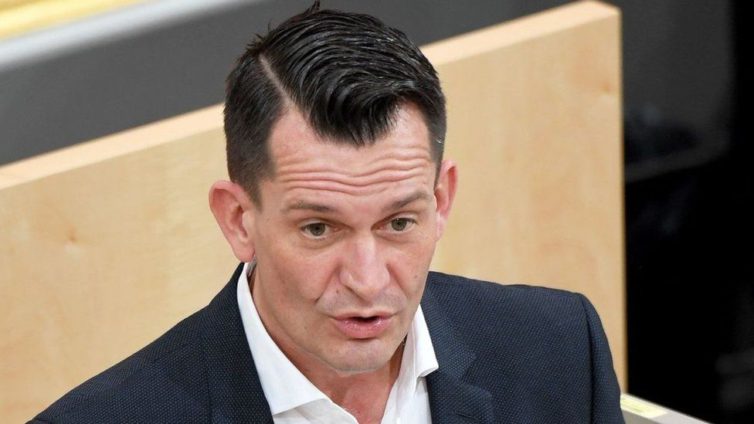 Health Minister Wolfgang Mueckstein said the mandate was how the country would "escape the cycle of opening and closing, of lockdowns"

The law, which is due to come into effect on 1 February, would make Austria the first European country to introduce a mandatory jab.

So far, 72% of Austrians have been fully vaccinated against the virus.

The bill must now pass the upper house and be signed into law by President Alexander Van der Bellen, steps largely expected to be formalities.

The vaccine order is expected to remain in force until January 2024, with the government investing €1.4bn in measures designed to encourage unvaccinated people to come forward for the jab.

Addressing lawmakers on Thursday afternoon, Health Minister Wolfgang Mueckstein called the measure a “big, and, for the first time, also lasting step” in Austria’s fight against the pandemic.

Chancellor Karl Nehammer told reporters ahead of the vote that vaccines were “an opportunity for our society to achieve lasting and continuous freedom, because the virus cannot restrict us any further”.

A majority of MPs, including those from Mr Nehammer’s governing centre-right coalition and the three main opposition parties, backed the bill, by 137 votes to 33.

The far-right Freedom Party, which has courted the votes of Austria’s substantial anti-vaccine minority, has taken a stand against the bill.

Its leader, Herbert Kickl, said the mandate “paves the way to totalitarianism in Austria” and vowed he would continue to refuse vaccination in defiance of the new law.

Since authorities announced they intended to introduce the mandate in November the capital, Vienna, has seen regular protests, with some numbering over 40,000 people.

The demonstrations have attracted a coalition of anti-vaccine campaigners and far-right extremists, and authorities have warned that they have been radicalising in recent weeks, with new “protective zones” declared around healthcare facilities and vaccination centres to protect workers.

Similar vaccine mandates are being introduced in several other countries, including in Greece, where jabs are now obligatory for everyone aged 60.

In neighbouring Germany, the new government led by Chancellor Olaf Scholz has said it will introduce a vaccination bill in the Bundestag in March.

In the UK, Prime Minister Boris Johnson has announced the end of mandatory face coverings in public places and Covid passports on 26 January.

Mr Johnson also suggested that the government intended to end the legal requirement for people who tested positive for Covid to self-isolate – and replace it with advice and guidance at the end of March.

The Irish government also looks set to end a raft of coronavirus restrictions introduced over the Christmas period, including rules mandating the closure of hospitality settings by 20:00.

And in the Netherlands 30 mayors, including Femke Halsema in Amsterdam, have urged Prime Minister Mark Rutte to curb tough restrictions amid a fall in hospitalisations and deaths.