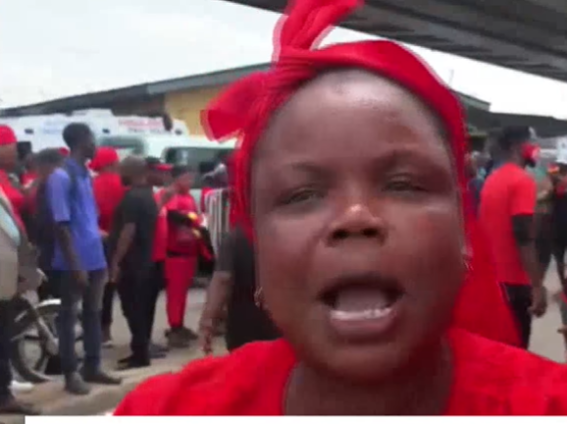 A protester with Arise Ghana has lamented the increasing cost of sanitary pads and condoms in the country.

The aggrieved protester, who appeared to be in her thirties, said the rise in the price of the commodity has made it difficult for she and other women to conveniently experience their monthly menstrual cycles.

Speaking in an interview with JoyNews‘ Manuel Koranteng on Tuesday, the protester, who spoke in the local Ga dialect also indicated that some men have been compelled to resort to rubbers instead of condoms.

This she said, has become a worrying development.

In her submissions, she also bemoaned the plights of fishermen in the country.

In this regard, she stressed that the prolonged closed fishing season, which is authorised by government makes life difficult for breadwinners who rely on fishing.

But what started as a coordinated protest soon degenerated into chaos; with the Police firing tear gas into the crowd. According to the Police, this was in reaction to some errant protesters who were bent on using unapproved routes.

The Police were also pelted by some protesters who accused the personnel of deliberately obstructing the flow of activities. This led to some police officers sustaining injuries, with some protesters being wounded as well.

Following the violent exchanges, the Ghana Police Service has condemned the developments and begun investigations into the incidents.