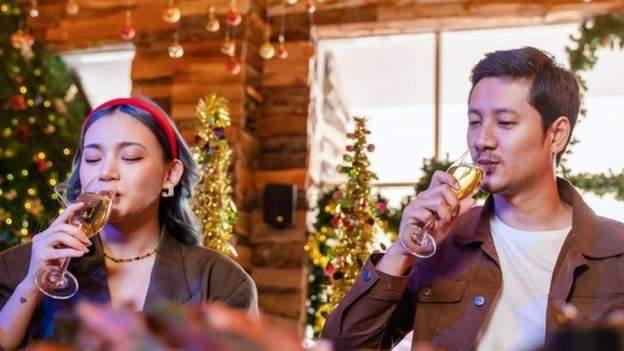 There is no need to call off Christmas parties despite the emergence of the Omicron variant, the health secretary has said, as he urged people to get a booster jab to fight Covid.

But NHS Providers said some NHS trusts had asked staff “not to mix in big groups” in the run-up to Christmas.

It comes amid an expansion of the booster vaccination rollout.

Saffron Cordery, Deputy Chief Executive of NHS Providers, told Sky News some trusts were setting an example by making that request to staff because of the “potential threat to their health and what they will be available to do”.

The booster jab programme was expanded amid concern that the Omicron variant of coronavirus may spread more quickly and make vaccines less effective.

In light of the variant, the government has accelerated new contracts with Pfizer/BioNTech and Moderna to buy 114m additional Covid vaccine doses for 2022 and 2023.

The deals – which are made up of 60m Moderna and 54m more Pfizer doses – include access to modified vaccines if they are needed to protect against Omicron and future variants of concern.

The government said it already has enough Moderna and Pfizer doses for the expanded booster programme, with Mr Javid adding the agreements would “future proof” the vaccine rollout.

The latest agreements come on top of the 35m extra Pfizer doses ordered in August for delivery in the second half of 2022, and 60m Novavax and 7.5m GSK/Sanofi doses which are also expected next year.

The Novavax and GSK/Sanofi vaccines have yet to receive regulatory approval for use in the UK.

Government scientists have said the impact of the variant on the UK is “highly uncertain” but it may require a “very stringent response” to avoid unsustainable pressure on the NHS.

A total of 32 cases of Omicron have been confirmed in the UK so far – 22 in England and 10 in Scotland.

On Wednesday, the UK recorded a further 48,374 coronavirus cases and another 171 deaths within 28 days of a positive Covid test.

More than 18 million people in the UK have already had a booster jab, with a further 392,589 recorded on Tuesday.

Prime Minister Boris Johnson has urged people to book in for their booster as soon as it is offered to them and suggested there was no reason that companies should be considering cancelling their annual staff Christmas parties.

At Prime Minister’s Questions – where he insisted that all Covid rules were followed at Downing Street last Christmas after media claims of parties during lockdown – he said the government had taken “balanced and proportionate” measures to protect people from the new variant.

Mr Javid said the right thing to do was to follow the existing guidance, including the changes made in England in the last few days.

Covid restrictions have been strengthened in response to the Omicron variant. New measures include:

Scotland’s national clinical director Jason Leitch told Times Radio people should do a “version of Covid certification” without the law telling them to, by ensuring they are vaccinated but also taking a lateral flow test each time before they attend a social event.

Some hospitality businesses have already reported cancellations since the confirmation of the first cases of the new variant being found in the UK.

Kate Nicholls, chief executive of trade body UK Hospitality, told BBC Breakfast the industry hoped the prime minister’s words would give people the confidence to continue to make Christmas plans and would “stem the flow of cancellations which we are starting to see”.

NHS England is to issue detailed guidance to hospitals, pharmacists and GPs about the major expansion of the Covid booster vaccine programme.

The government aims to offer all adults in England a top-up shot by 31 January. People become eligible to book a booster jab three months after their second.

Hospital hubs will be asked to offer vaccines to the public as well as NHS staff and more pharmacies will be used in a bid to meet the January target.

Mr Javid told BBC Breakfast the vaccination programme needed to deliver one million more jabs a week to reach that target and said more volunteers were needed to help with tasks at vaccination centres.

He said there was “nothing more important” than the two-month booster push, but acknowledged it was a “tough ask”.

The health secretary said the NHS was working with GP representatives to suspend some of the workload of GPs so they can “concentrate on vaccine delivery”.

Northern Ireland has also announced extra vaccination clinics to meet demand. Scotland and Wales have said their booster programmes will be ramped up, but are yet to lay out the full details.