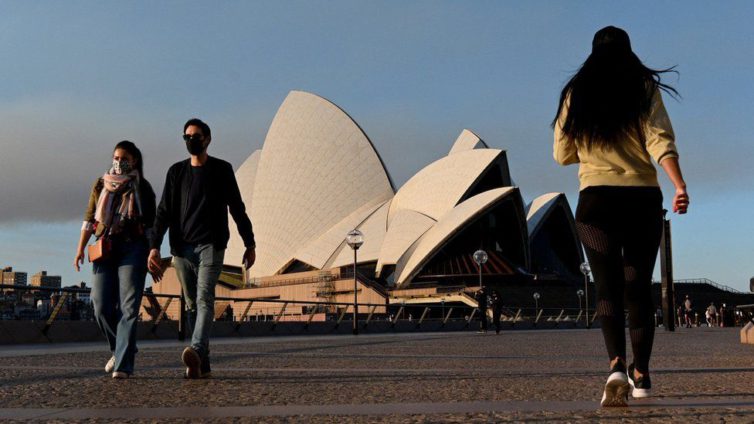 Australia is pushing to exit lockdowns, but experts say it has a cautious strategy

The Australian city of Sydney has emerged from lockdown after almost four months, with locals celebrating a range of new freedoms.

People queued for pubs and shops that opened at midnight on Monday specifically for the occasion.

Many others have been enjoying anticipated reunions and visits to the homes of relatives and friends.

Covid rules had banned household visits and travel beyond a 5km (3.1 miles) zone, separating many families.

But most restrictions have now been eased for fully vaccinated people.

People can now share meals together at reopened cafes and restaurants, and visit gyms, libraries, and pools. There were long queues for barbers and nail salons on Monday.

The Lord Gladstone Hotel, an inner city pub, was doing a roaring lunch trade after months of limited trading and takeaway-only options.

“We’re stoked to be back, we’re having the best Monday in months, even before Covid,” Pat Blake, the pub’s licensee, told the BBC.

“People are just ready to come back and sit down for a schooie [beer], see their friends, be somewhere there’s always music playing,” he said.

“The kitchen is pumping. I had forgotten about the pub smells. As soon as the fryers turned on it was really nostalgic.”

Australia’s biggest city was allowed to exit lockdown after the state of New South Wales (NSW) reached a 70% double-dose vaccination target for over-16s.

More restrictions will ease when 80% of over-16s are fully vaccinated. Currently, over 90% have received a first dose.

“But the efforts that people have made right across the state, to go out and get vaccinated, has enabled this great day.”

Mr Perrottet warned that NSW was bracing for a surge in Covid cases, but said the healthcare system had been preparing for weeks.

“We’ll see hospitalisations increase… but we need to learn to live alongside the virus,” he said.

The state has not yet imposed a system to check vaccination status, leaving it up to individual businesses.

Sydney’s lockdown began in late June after a Delta variant outbreak took hold, leading to over 50,000 infections and 439 deaths so far.

It spread to Melbourne and Canberra, prompting those capitals to go into lockdown, as well as to New Zealand.

Canberra is due to exit lockdown on Friday, while Melbourne is predicted to reopen in late October.

Australia had previously adhered to a Covid elimination strategy, and this remains the objective in some states.

But the rapid spread of the Delta variant forced a greater focus on vaccination efforts so Australia could switch to “living with the virus”.

Queensland, Western Australia, South Australia, Tasmania and the Northern Territory have remained virus-free after shutting their borders to infected states.

Authorities have flagged that Australians living abroad could travel back into Sydney next month, as the nation’s borders reopen.