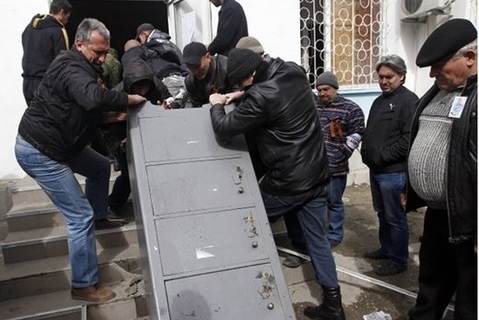 Pro-Russian activists have taken control of the headquarters of Ukraine's navy in the Crimean city of Sevastopol.

Several Ukrainian servicemen have left, the Russia flag is flying and there are reports that Ukrainian navy chief Serhiy Hayduk has been detained.

It comes a day after Crimean leaders signed a treaty with Moscow absorbing the peninsula into Russia.

Sunday's referendum on splitting from Ukraine has been widely condemned.

Crimean and Russian officials say the vote showed overwhelming public support for joining Russia, with 97% of voters in favour.

But the West and the Ukrainian government in Kiev say the referendum – organised in two weeks and boycotted by many of Crimea's Ukrainian and Tatar minorities – was illegal, and the results will not be recognised.

The BBC's Richard Galpin in Moscow says there is no doubt that Russia's parliament will give its full backing to the treaty when it votes on Friday.

Ukrainian Defence Minister Ihor Tenyukh has reportedly been ordered to head to Crimea, where Ukrainian troops are vastly outnumbered by Russian forces.

Russia's Interfax news agency quoted Crimea's Prime Minister Sergei Aksyonov, who is in Moscow, as saying: "Nobody will let them into Crimea, they will be sent back."

The port city of Sevastopol is home to the Russian Black Sea fleet.

Pro-Russian forces appeared to have taken control of the Ukrainian base there without a shot being fired.

An officer inside the base told the BBC that some 200 pro-Russian activists had broken down the gates and gone inside to negotiate with Ukrainian officers.

Ukrainian navy spokesman Sergiy Bogdanov said officers had barricaded themselves inside the building.

Even though Kiev has authorised the military to use force in Crimea in self-defence, he said "we are not doing so and will not do so".

A number of Ukrainian servicemen were later seen leaving the base carrying their belongings, and Russian flags were raised over the building.

The AFP news agency said one serviceman was in tears as he walked out.

There were then reports that Serhiy Hayduk had been detained and taken from the base by the Russian Federal Security Service (FSB).

"He was blocked and he had nowhere to go. He was forced out and he has been taken away," said Igor Yeskin, a representative of the Russian forces.

Ukraine's defence ministry reported a similar incident at a its navy base in Novo-Ozyorne, in western Crimea.

Defence ministry spokesman Vladyslav Seleznev said on Facebook that a tractor had rammed the gates of the compound and blocked the entrance.

The US and the EU are among those who have imposed sanctions on several officials from Russia and Ukraine accused of involvement in Moscow's actions in Crimea.

Brussels and the White House have said the sanctions will be expanded – Moscow has warned this is "unacceptable and will not remain without consequences".

He fled Ukraine on 22 February after protests in which more than 80 people were killed.

Crimea was handed to Ukraine by the Soviet Union in 1954, and has a predominantly ethnic Russian population.

Pro-Russian forces effectively took control of the peninsula in late February and gunmen seized buildings, including the parliament.

The prime minister was removed from office on 27 February by a vote of no confidence and replaced by pro-Moscow Sergei Aksyonov, leader of the small Russian Unity party, who called the referendum.

In an emotionally charged speech before he signed the treaty in Moscow on Tuesday, Russian President Vladimir Putin said Crimea had "always been and remains an inseparable part of Russia".

"The people of Crimea clearly and convincingly expressed their will – they want to be with Russia," he said, and were no longer prepared to put up with the "historical injustice" of being part of Ukraine.