Criminologist cautions against new wave of robbery in open spaces, including churches 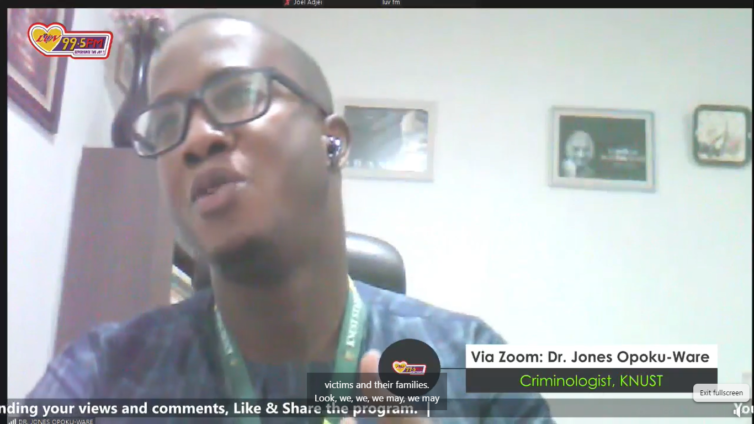 The patterns of crime, especially robberies, in Ghana have changed in the last couple of years.

According to a criminologist with the Kwame Nkrumah University of Science and Technology (KNUST), criminals are looking for easy targets in open spaces to attack at minimal risk.

Dr Jones Opoku-Ware has cautioned people who ply their businesses and other activities on the streets and open spaces should be wary.

Churches are among easy preys, he observed; hence, the need to modify their security measures as they are increasingly targeted.

“Churches are supposed to be very careful because we’ve had cases where people had to engage in grand auto theft in churches,” he said.

JoyNews/AdomNews · Criminologist cautions against new wave of robbery in open spaces, including churches

“Apart from telling the good news to people, the churches deal in money, in terms of collections and all, and most of the time, what attracts these criminals is money.”

The security expert was reacting to a recent robbery and shooting incident in a church in the Ashanti region.

The gunmen stormed the Heaven Embassy Chapel International in the Atwima Kwanwoma District town of Afrancho near Kumasi and opened fire on worshippers during a Good Friday service.

Some members of the congregation sustained injuries.

Dr Opoku-Ware noted that “most of the time, we don’t have so much security within church premises…so criminals look at this situation and find the environment conducive for their operations at a lower risk.”

Criminals are now more rational in their operations but do not have a conscience and have the sole aim of getting what they need at any point in time, he added.

Dr Jones Opoku-Ware also reacted to the 2021 Public Safety and Crime report that names the Ashanti Region as recording the highest number of murder cases in the country.

The report puts Ashanti on top of over the 200 murder cases recorded across the country in 2021.

The Region also recorded 23 per cent of all homicides in the year under review.

He said until the conditions and fundamental enablers of crime change; the Ashanti Region will keep topping such statistics.

“I’m not surprised the Ashanti region is the murder capital of the country. This trend started in 2012.”

“Murder is the ultimate crime. When it happens, all state apparatus must be put into action to solve and unravel whatever happened,” he said.

The security expert wants the Police to go beyond the phenomenon of asking people to surrender their firearms.

It is estimated that there are over 2 million illicit and illegal firearms in the custody of people.

“We must go to the roots of these weapons, which are the suppliers. It’s very important that we get to manufacturing hubs to deal with these people.

“We can legitimise the operations of those suppliers and integrate them into law enforcement, where their weapons can be tracked,” Dr Opoku-Ware suggested.

Meanwhile, he says the success of the judiciary should be defined in its ability to solve and bring finality to cases of crimes and murders.

DISCLAIMER: The Views, Comments, Opinions, Contributions and Statements made by Readers and Contributors on this platform do not necessarily represent the views or policy of Multimedia Group Limited.
Tags:
Armed robbery
Ashanti Region
crimes
Dr Jones Opoku-Ware
Murder cases