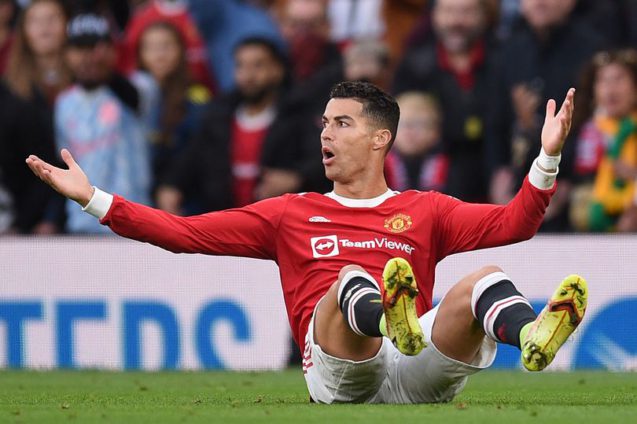 Cristiano Ronaldo has attempted to rally the Manchester United dressing room in their time of crisis.

Sources say Ronaldo is holding the dressing room together and he has encouraged teammates to support beleaguered manager Ole Gunnar Solskjaer.

Ronaldo advised the United players to not down tools, irrespective of what they thought of Solskjaer’s tactics, until an eventual change of manager.

United have resisted sacking Solskjaer mainly because they have no succession plan for the Norwegian, who will take charge at Tottenham on Saturday.

High-ranking figures at the club gave no consideration to dismissing Solskjaer prior to Sunday’s seismic 5-0 thrashing by Liverpool and some are ‘not keen’ on the former Inter Milan coach Antonio Conte, who is open to replacing Solskjaer.

A number of United players have lost faith in Solskjaer. His selections have baffled the players since the start of the season when he started Daniel James against Wolves two days before he was sold to Leeds United for £25million.

Some players were stunned Solskjaer named an unchanged team for the drubbing by Liverpool on Sunday and Jesse Lingard’s lack of playing time has mystified players. Donny van de Beek’s training performances have impressed teammates but the £40million midfielder has played five minutes in the Premier League all season.

United figures belatedly expressed support for Solskjaer on Tuesday afternoon – 48 hours after the Liverpool match – as he prepares to manage the club for the 165th time at Tottenham.

The United executive vice-chairman Ed Woodward said last month he had ‘never been more confident’ of success under Solskjaer and the managing director Richard Arnold gushed Solskjaer was ‘bringing phenomenal success’ back in March. United are seventh in the Premier League after three defeats in their last four games.

Woodward has attended only a handful of United games over the last year whereas Arnold has been ever-present amid the expectation he will replace Woodward as executive vice-chairman. Woodward tendered his resignation back in April following the collapse of the Super League but United have not confirmed his departure date.

DISCLAIMER: The Views, Comments, Opinions, Contributions and Statements made by Readers and Contributors on this platform do not necessarily represent the views or policy of Multimedia Group Limited.
Tags:
Cristiano Ronaldo
Manchester United
Ole Gunnar Solskjaer