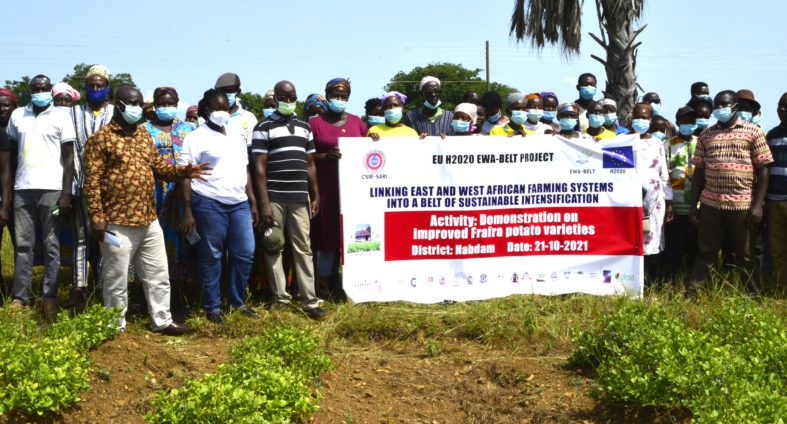 The Savannah Agriculture Research Institute of the Council for Scientific and Industrial Research [CSIR – SARI] has introduced new varieties of the ‘Frafra’ potato crop to farmers in the Talensi and Nabdam districts of the Upper East Region.

Frafra Potato is a common type of potato cultivated in Northern Ghana for food and is popular for its nice aroma when cooked.

Since the year 2018, the CSIR – SARI has worked to develop improved varieties of the crop to help farmers produce it in larger quantities due to its potential to help solve the problem of food insecurity in some parts of the north.

The Frafra Potato is commonly called Pee’ha or Pee’sah in the Frafra and Kusasi areas of the Upper East Region.

The size of the Frafra Potato is not like that of regular potatoes. They are just about the size of the fingers of an average adult human or slightly bigger than that.

Sometimes, they are also somewhat round and the size of marbles.

Traditionally, Frafra Potato is consumed mainly as a snack, just like people would do with groundnuts, but they can keep a person quite satisfied for extended hours if consumed in a large quantity.

Also, people love the Frafra potato or Pee’ha because of its unique aroma, especially when it is still being cooked.

Robert Babil, a farmer at Kongo in Nabdam district who has cultivated this crop for decades, say it is very easy to cultivate, as it grows well on almost any type of soil.

“It can help reduce poverty in our communities if farmers can get help to produce more it”, Babil says.

He added, “When you harvest, it is easy to store. All you have to do is dry the potatoes in the open sun and store them in sacks, and they will last for a long time”.

Robert Babil also talks about how much the Frafra Potato is loved.

“Our people enjoy eating it very much. When you cook Pee’ha together with fresh beans, it tastes very nice, and when you consume a small quantity, it makes you drink lots of water, and you don’t crave much food during the rest of your day”, he says.

This special food crop has existed for dozens of years, maybe even centuries.

Until now, the methods used by farmers to cultivate Frafra Potato was the traditional way which involved using tubers, but the Savannah Agriculture Research Institute [SARI] of the Council for Scientific and Industrial Research [CSIR] has since the year 2018, been working to introduce new, improved varieties of the crop.

The institute has identified the Frafra Potato as key to helping reduce hunger in communities.

There are now five varieties of Frafra Potato, which can also be cultivated using stem cuttings instead of tubers.

Acting Director and Senior Research Scientist at the Savannah Agriculture Research Institute of the Council for Scientific and Industrial Research – Tamale, Dr Francis Kusi, believes that the Frafra Potato has great potentials, but it is being underutilised.

“Frafra Potato is one of the underutilized crops which has great food value, nutritional value and even medicinal value”, he said.

“The technology that we developed to facilitate its production in large scale through the stem cutting approach; we believe will help the farmer in this region”, Dr Kusi added.

A total of 130 farmers selected from the Talensi and Nabdam districts have been introduced to the new, improved varieties of Frafra Potato at a CSIR – SARI trial field at Kongo in the Nabdam district.

The farmers were lectured on the qualities of the improved varieties and trained on how they can cultivate the crops to get higher yields.

Some of the farmers were excited about what they saw.

One of them, Fuseini Bugbon, said for him, the stem cutting method of cultivating the potato was better than the old way of using the tubers.

“If you compare the old system, you have just to take the tuber itself and then store for some time. Sometimes, it fails you because if you are not able to maintain it well, it goes bad. But with this [stem cuttings], it is very simple; you burry them [the cuttings] and after they crop up, all you have to do is water them, and in a few months, you prepare your field and transplant directly”, Bugbon explained.

The Upper East Regional Crop Officer, Joshua Diedong, said the Department of Food and Agriculture was hopeful that the improved varieties of Frafra potato will open up more economic opportunities for farmers.

DISCLAIMER: The Views, Comments, Opinions, Contributions and Statements made by Readers and Contributors on this platform do not necessarily represent the views or policy of Multimedia Group Limited.
Tags:
CSIR-SARI
Frafra Potato
Nabdam
Talensi
Upper East Region