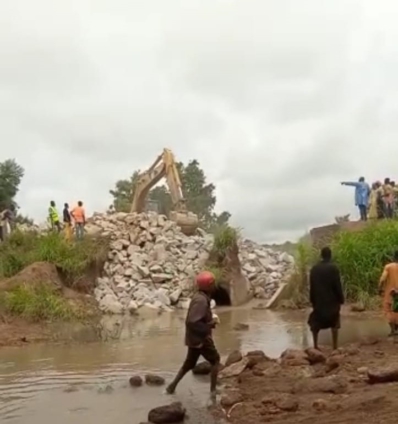 Government has engaged MAWUMS, a construction firm, to work on the culvert on the Wapuli Yendi road in the Northern Region which collapsed several days ago.

The contractor was on site on Saturday and worked to get the road fixed after the bridge caved in cutting the area off from the rest of the country.

Currently, the area is open to traffic after a large portion of the work was done.

Earlier in the week, Myjoyonline.com reported about the collapse of the culvert which made it difficult for travellers to ply that stretch.

A resident, Jacob Nakoja, who spoke to JoyNews said the residents had resorted to using a footpath that posed a danger to the people because it was a lonely bushy path.

He had also expressed worry about how examination papers for the ongoing West Africa Senior High School Certificate were been transported.

But speaking to JoyNews, Jacob Nakoja said it was a relief that government had come to their aid.

He said travellers are currently moving freely from one end to the other.

“There is work ongoing on the Chereponi-Wapuli-Yendi Road. The road is now motorable and open to users. We are told government engaged MAWUMS construction firm and it is done,” he said.

The resident also thanked the media for highlighting their plight.

“We thank God and the media for giving us a voice,” Mr Nakoja added.

DISCLAIMER: The Views, Comments, Opinions, Contributions and Statements made by Readers and Contributors on this platform do not necessarily represent the views or policy of Multimedia Group Limited.
Tags:
culvert
Wapuli
Yendi