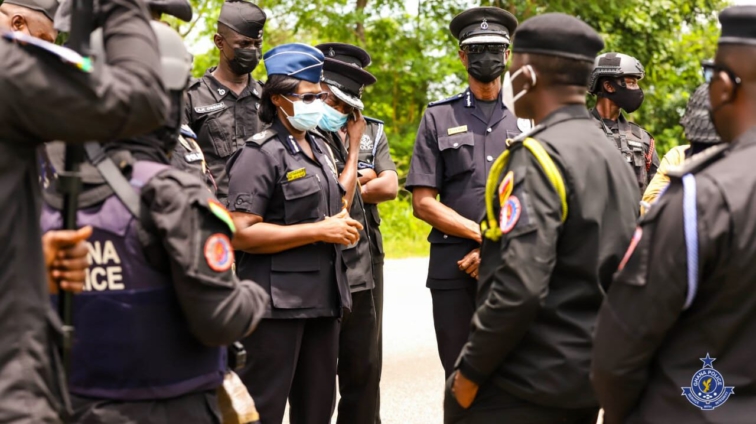 The Acting Inspector-General of Police, Dr George Akuffo Dampare, has embarked on a 60-hour ground operational tour in the Bono East region.

The dawn-to-dusk tour which was undertaken on Monday and Tuesday was to among others, review ground combat operations, interact with the chiefs and people of the region and as well interact with personnel on the ground on the security situation in the area.

The region has over the past few years recorded high cases relating to serious crimes such as Highway robbery, murder and armed robbery.

The tour took him to Techiman, Tuobodom, Wenchi, Nkoranza, Abease, New Longoro, Prang, Yeji among others.

To quell insecurity in these areas, one hundred and fifty highly skilled combat operatives have been deployed to assist police in the region.

During his interaction with personnel at more than 30 different operational checkpoints and police stations, Dr Akuffo Dampare gave the assurance that the police administration will continue to provide resources to personnel on the ground to fight serious crimes.

He also thanked the men and women on the ground for the many successful combat operations which had yielded positive results over the last few days.

At Abease, New Longoro and Yeji in the Bono East Region, the excited chiefs and opinion leaders told the delegation that the operational tour and interaction with the chiefs was the first of its kind by any IGP and they further pledged their support to police operations in the area.

Other senior officers from the National Headquarters and the Bono East Region accompanied the team to the aforementioned areas.