Death sentence too final, mistakes can be made – Justice Lovelace-Johnson 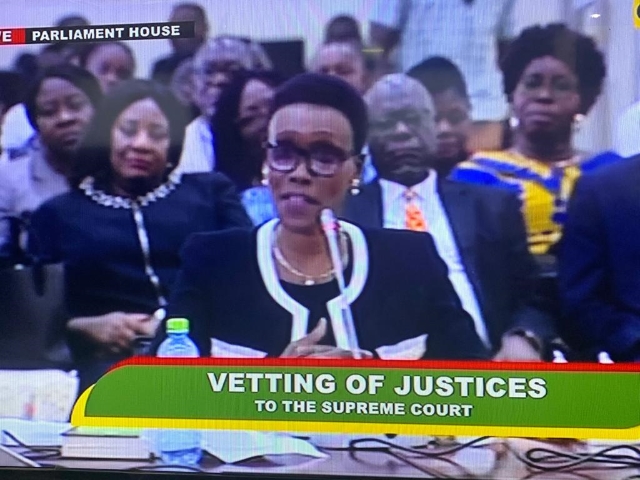 The death penalty, a form of capital punishment instituted by the constitution requires that certain crimes, as dictated by the law, are punished by death.

In Ghana, certain crimes like murder are punishable by death, and in response to this law, judges continue to sentence people to death as dictated.

While some Human rights organisations, including Amnesty International (AI), have continuously called for the total abolishing of the death penalty by 2020, many have argued that prisoners on death row are not executed but allowed to die naturally.

But declaring her stance on the issue, Justice Avril Lovelace-Johnson said she was so terrified the first time she sentenced someone to death.

“I remember when I had to sentence someone to death, those days we did it through a whole ceremony. They put a black cloth on your head, the court clergy will say something and make some pronouncement about you being hanged by the neck until you die and your body will be buried. I was shaking like a leaf, I didn’t sleep for about a week,” she told Parliament’s Appointment Committee, Monday, December 9.

“The judiciary is made up of people and they can make mistakes. But death is so final. If you make a mistake and the person is already dead what will you do? So for me, that was the bases apart from the fact that the death penalty was also against someone’s right to life. Judges can make a mistake only to find out later and by that time the person can be dead and for me, that is enough to kick against it,” she added.

Giving her take on abortion, Justice Lovelace-Johnson said, it was important for women to be given the opportunity to decide whether to keep a baby or abort it. According to her, women shouldn’t be compelled to keep their babies against their will.

“The law says you can choose to have an abortion if the pregnancy is as a result of rape. If a doctor says that the pregnancy can affect your health, you can choose to have an abortion and I think the law also says if a woman has a mental issue and get pregnant, an abortion can be done. Now, I am pro-choice so that I can choose what I want but if I say I am pro-life, I have no choice in the matter. But even the good Lord gives us a choice in the way we live our life so long as we are ready for the consequences. So yes, I am pro-choice which means I have a choice to make decisions concerning my sexual productive health,” she stated.