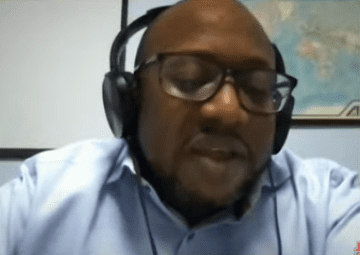 Director of Advocacy and Policy Engagement at the Centre for Democracy and Development (CDD), Dr Kojo Pumpuni Asante, has expressed worry over the delay in ensuring perpetrators of deaths recorded during the 2020 general elections are brought to book.

According to Dr Kojo Pumpuni, it has been about 10 months since the just-ended elections and neither has there been an update nor have investigations concluded after the police took over the case this year.

Speaking on JoyNews’ PM Express, he decried the casualties recorded, insisting that failure to provide justice would ensure such unfortunate incidents recur in the nearest future when the country heads to the polls once again.

“The deaths recorded is the worst thing that has happened to this country. That eight people will lose their lives on election day. It is something that if we don’t learn lessons from and ensure that justice is delivered – because they died at the hands of state agents, that is what makes it even more worrying, we are even creating the foundation for even more violence at the next election.

“We have found this indecision and delay in trying to resolve this matter forgetting that in war, people are even held accountable,” he said on Monday.

He cited a situation where US soldiers were held accountable for their unlawful conducts in Iraq and Afghanistan.

Dr Pumpuni further told host, Evans Mensah such a delay would only affect the image and confidence Ghanaians have in the security agencies to ensure such matters are resolved.

“There is no excuse, the more we do that, then we completely undermine the institutions and the confidence in the institutions. Ten months down the line, why have we not found justice for these people who were killed or come to a conclusion as to exactly what happened.

“How long do you investigate this process? There are videos, testimonies. This must have been concluded by now.”

He, therefore, used the opportunity to urge the Ghana Police Service to bolster processes to ensure the culprits face the music to restore public confidence.

“This is now an opportunity for me to call on the Ghana Service, particularly now that we have an IGP who wants to restore confidence in the police service that this has to be concluded so that citizens know that if the people who are paid to protect them violate the law, they are also going to be held accountable.”

Meanwhile, the CDD Director of Advocacy and Policy Engagement has admonished political parties to be circumspect in their claims while assessing the just-ended elections.

According to the National Democratic Congress (NDC), the military played a role in the declaration of the presidential election results and there was ballot stuffing of one million thumb-printed ballot papers.

But Dr Pumpuni has warned against such claims as it can affect the credibility of Ghana’s electoral system.

“We have to be careful in our quest to state our claims about the conduct and outcome of the election. Because you can create an environment where everything can be manufactured. An environment where an experience any voter has is basically an illusion, therefore, you lose complete confidence in the process,” he said.

He added that “In spite of all the challenges we have with our elections, our election system as it is, is quite robust.

If you make a claim that 1million ballot papers were created and somehow distributed to all the polling stations, through some process of ballot stuffing, where in all of these places you have NDC agents, and somehow in a very competitive election where every time these two parties go to the polls anybody can lose and that the NPP could have gotten away with is process of stuffing all this ballot papers, then I think that this is really a stretch for me.”