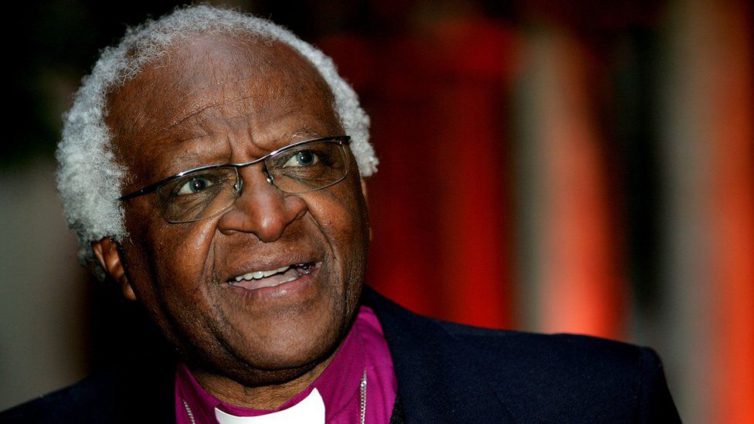 Desmond Tutu was the smiling South African archbishop whose irrepressible personality won him friends and admirers, around the world.

As a high-profile black churchman, he was inevitably drawn into the struggle against white-minority rule but always insisted his motives were religious, not political.

He was appointed by Nelson Mandela to head South Africa’s Truth and Reconciliation Commission set up to investigate crimes committed by both sides during the apartheid era.

He was also credited with coining the term ‘Rainbow Nation’ to describe the ethnic mix of post-apartheid South Africa.

Desmond Mpilo Tutu was born in 1931 in a small gold-mining town in what was then the Transvaal.

He first followed in his father’s footsteps as a teacher but abandoned that career after the passage of the Bantu Education Act in 1953 which introduced racial segregation in schools.

He joined the church and was strongly influenced by many white clergymen in the country, especially another strong opponent of apartheid, Bishop Trevor Huddleston.

It was as a dean that he first began to raise his voice against injustice in South Africa and again from 1977 onwards as general secretary of the South African Council of Churches.

Already a high-profile figure before the 1976 rebellion in black townships, it was in the months before the Soweto violence that he first became known to white South Africans as a campaigner for reform.

His efforts were crowned with the Nobel Peace Prize in 1984 in what was seen as a major snub by the international community to South Africa’s white rulers.

As head of the Anglican Church in South Africa, he continued to campaign actively against apartheid. In March, 1988, he declared: “We refuse to be treated as the doormat for the government to wipe its jackboots on.”

Six months later, he risked jail by calling for a boycott of municipal elections.

He was caught in a cloud of tear gas in August 1989, when Police took action against people leaving a church in a township near Cape Town, and the following month he was arrested after refusing to leave a banned rally.

As Archbishop, his calls for punitive sanctions against South Africa struck a chord throughout the world, especially as they were coupled with a total condemnation of violence.

In 1985, Tutu and another bishop bravely and dramatically rescued a suspected Police informer as he was being assaulted and about to be burnt to death by an angry mob in a township east of South Africa’s main city, Johannesburg.

The clergymen pushed through the mob and pulled to safety the bleeding, half-conscious man, just before the petrol-doused tyre around his neck was set alight.

Tutu warmly welcomed the liberalising reforms announced by President F.W. de Klerk soon after he took office. These included the lifting of the ban on the African National Congress (ANC) and the release of Nelson Mandela in February, 1990.

Soon afterward, Tutu announced a ban on clergy joining political parties, which was condemned by other churches.

On Israel and the Palestinians

He was never afraid to voice his opinions. In April, 1989, when he went to Birmingham in the UK, he criticised what he termed “two-nation” Britain, and said there were too many black people in the country’s prisons.

Later he angered the Israelis when, during a Christmas pilgrimage to the Holy Land, he compared black South Africans with the Arabs in the occupied West Bank and Gaza.

He said he could not understand how people who had suffered as the Jews had, could inflict such suffering on the Palestinians.

Desmond Tutu was a great admirer of Nelson Mandela, but did not always agree with him on issues such as the use of violence in pursuit of a just end.

In November, 1995, Mandela, then South Africa’s President, asked Tutu to head a Truth and Reconciliation Commission, with the task of gathering evidence of apartheid-era crimes and recommending whether people confessing their involvement should receive amnesty.

At the end of the Commission’s inquiry, Tutu attacked South Africa’s former white leaders, saying most of them had lied in their testimony. The Commission also accused the ANC of committing human rights abuses during its fight against apartheid. Both sides rejected the report.

Tutu was often overcome by the pain of those who had suffered under apartheid and, on more than one occasion, was reduced to tears.

He also found much to criticise in South Africa’s new black-majority government. He launched a stinging attack on the ANC administration led by President Thabo Mbeki.

He said the ANC had not done enough to alleviate poverty among the poorest in the country and that too much wealth and power was concentrated in the hands of a new black political elite.

He later urged Jacob Zuma, who had been accused of sexual crimes and corruption, to abandon his attempts to become President.

He was also vocal in his condemnation of Robert Mugabe, once describing the Zimbabwean President as “a cartoon figure of an archetypical African dictator”. Mugabe, in turn, described Tutu as “evil.”

He could also be critical of his own Anglican church particularly in the aftermath of the row over the ordination of gay bishops.

“God is weeping,” he once said when he accused the church of allowing an “obsession” with homosexuality to take precedence over the fight against world poverty.

He returned to the subject of poverty when he visited Ireland in 2010. He urged Western nations to consider the effect of cuts in overseas aid in the wake of the economic downturn.

Tutu formally retired from public life in the same year to, he said, spend more time “drinking red bush tea and watching cricket” than “in airports and hotels”.

But ever the rebel, he came out in support of assisted suicide in 2014, stating that life should not be preserved “at any cost”.

Contrary to the views of many church figures, he held that human beings had the right to choose to die.

He said his great friend and fellow campaigner Mandela, who died in December, 2013, had suffered a long and painful illness which was in his opinion “an affront to Madiba’s dignity”.

In 2017, Tutu sharply criticised Myanmar’s leader and fellow Nobel Peace laureate, Aung San Suu Kyi, saying it was “incongruous for a symbol of righteousness” to lead a country where the Muslim minority was facing “ethnic cleansing.”

Later that year, he opposed Donald Trump’s decision to recognise Jerusalem as the official capital of Israel. “God is weeping,” he wrote on Twitter, over this “inflammatory & discriminatory” act.

A small man, “the Arch”, as he was known, was gregarious and ebullient, emanating a spirit of joy despite his intense sense of mission.

He was witty, and his conversation was frequently punctuated by high-pitched chuckles.

But beyond this, Desmond Tutu was a man of impeccably strong moral convictions who strove to bring about a peaceful South Africa.

DISCLAIMER: The Views, Comments, Opinions, Contributions and Statements made by Readers and Contributors on this platform do not necessarily represent the views or policy of Multimedia Group Limited.
Tags:
Apartheid
Desmond Tutu
Nelson Mandela
South Africa