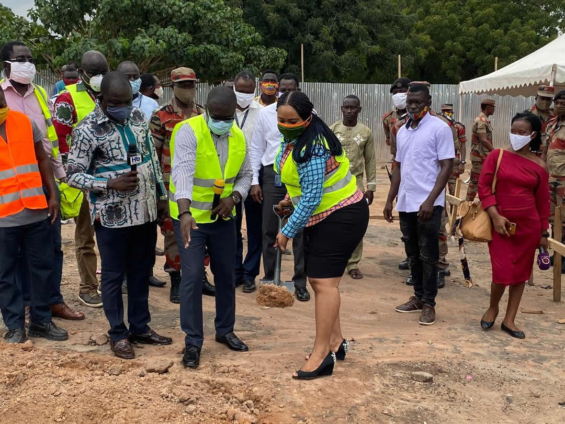 Dome-Kwabenya MP Adwoa Safo has cut sod for the construction of an ultra-modern District office for the National Health Insurance Authority (NHIA) and a Fire Service Station in her Constituency.

Speaking at the sod-cutting ceremony for both the NHIA office and the Fire Service Station, which was held at the project site near the Atomic Roundabout, the MP noted that, owing to the lack of a District Office for the NHIA, her constituents are compelled to make do with a small office store at Dome, which she said, is very inconveniencing to healthcare delivery, thus justifying the decision to construct a new office befitting the fast-growing metropolis.

The new edifice, according to her, has a reception area, general offices, documents control room, MIS office, accounts office, manager’s office, conference room and other amenities including vehicle parking area for patrons.

She also gave further details of the project, which she said, is expected to be completed within six months and constructed by Messrs Elpizo Enterprise Limited will cost some ₵1,500,000, which is fully funded by the government of Ghana.

The MP, who doubles as the Minister of State in-charge of Public Procurement and also the Deputy Majority Leader in Parliament, observed that, “the spirit of this gesture is to reinforce the broader objective of government’s effort to provide infrastructure for the delivery of effective healthcare nationwide pursuant to Goal 3 of the United Nations Sustainable Development Goals”.

She also, in line with her social contract with the people, spoke about her health-related achievements in the constituency including the construction of the Haatso Maternity Clinic; the commissioning of the Ga East Municipal Hospital which she spearheaded; the ongoing construction of Clinical Service and Out Patients Department (OPD) Block at the Abokobi Health Centre; provision of Free Health Screening as well as enrolling thousands of her constituents onto the NHIS and renewing their registration status as required among several health undertakings.

On her part, the Municipal Chief Executive for the Ga East Municipal Assembly, Janet Tulasi Mensah, who spoke on behalf of the Local Authority, thanked the Dome-Kwabenya legislator for the huge initiative.

Equally, the Director of Logistics for the Ghana Fire Service, Samuel Brenya, expressed the Service’s appreciation to the MP and her team.

Adwoa Safo used the occasion to thank the Ghana Atomic Energy Commission (GAEC) for providing land for both projects.

She also appealed to her constituents and the Ghanaian people at large to continue to repose their confidence in the NPP and the Akufo-Addo government as well as in her good self, as the MP for the area, to continue the good works in delivering prosperity to the good people of Dome-Kwabenya and to the rest of the country.