Domelevo starts payroll audit as over 600,000 workers consume half of gov’t revenue 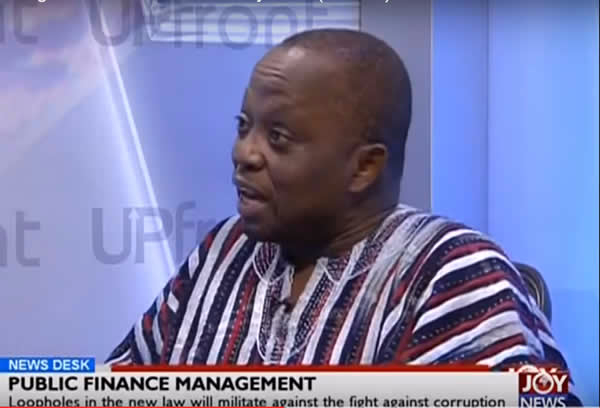 Auditor General Daniel Domelevo has said it is unacceptable to spend half of the country’s revenue on less than one million government employees.

According to him, many organisations have shielded people who perpetrate wrong including maintaining the contract of people who have retired.

He said the situation partly accounts for the unemployment situation in the country.

Mr Domelevo said this Monday at a meeting with the Audit Service including the team that will start the special exercise of monitoring payroll fraud at Elmina in the Central Region.

A nationwide crackdown on payroll fraud is set to begin this week and is expected to force all civil servants to justify their employment status.

This is part of government’s radical steps to remove ghost names from the country’s payroll.

The Auditor General’s Department is teaming up with the Special Prosecutor to enforce the measure which starts in the Central Region from July 17.

All civil servants in the region will have a 10-day window to produce evidence of their employment and those who cannot do so will face prosecution.

“People have asked me, ‘don’t you fear [for your life] with what you are about to do?’ I told them I don’t really care and I will be a very happy man if I die doing the right thing.

“We have to defend our country…people think donor support will develop Ghana but they should note that nobody is coming to build your father’s house for you…you have to build it yourself,” Mr Domelevo said.

According to him, it is commonplace to hear people saying ‘the president is coming to develop Ghana for us’ but he lamented the attitude of the civil servants which he said does not augur well for development.

Mr Domelevo said such attitude and apathy motivated and necessitated waging a war on payroll fraud since it is the major consumer of government’s resources.

He is questioning why government must spend a lot on a minority of civil servants when the majority are left with nothing and worse off.

The Auditor General is surprised a majority of government revenue is spent on over 600,000 civil servants on government payroll.

“So, if you are spending about half of the total revenue on less than 1 million people, what should the other 27 million do?” he quizzed.

The Auditor General also hinted of a procurement and contract audit will follow the payroll monitoring.