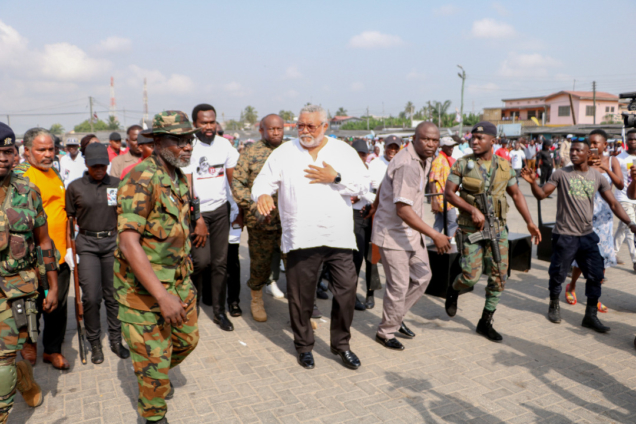 As we commemorate the 39th anniversary of the 31st December Revolution, let me make the point once again that Rawlings was a man of a deep conviction and a patriot of a highest order.

He was a public servant of the finest tradition of our country and this was clearly demonstrated during and after his second coming on 31st December 1981.

Simply put, he was a deity with a humble spirit, human centeredness and an exceptional moral authority.

The tapestry of his wisdom sustained the forth republic, deepened our socio-cultural and political discourse and transcended the boundaries of Africa.

He was that boundary tree on the continent that the elders of his native land refer to as ‘Ekportsi [the boundary tree].

As the old adage goes- ‘Awa sia me me sia Kportsi o Kportsi ne nor anyi ne duwo na va kpor,’ which implies that even in times of adversity or war, the boundary tree remains and represent the reference point. In  other words, the compass.

Rawlings is the compass and his legacy remains the reference point. As per the judgment of Rawlings who watched from a distance how the government and state issues were handled, the old spirit of corruption was quickly invading the system and key performance indicators were alarmingly negative.

The political nature of Limann made it impossible for him to be able to resolve Ghana’s neocolonial economic dependency and it was clear that Western intensive economic immorality was going to linger for many years.

This and many other reasons propelled the December 31st Revolution of 1981.

It’s important at this juncture to draw the attention of the NDC, a party that was formed by H.E Former President Rawlings, to be mindful of how it intends to address the issues confronting Ghanaians; the decisions it makes each and every day, and the leadership style it aspires to perpetrate into the future as the present leaders gradually hand over power to the younger generation.

It is important for the party to eschew individualism and unite around its core values – these are fundamental keys to creating a winning strategy.

It is crucial that the NDC remains resolute and focus on building its structures without malice and self-destruction.

It is imperative to understand that, leaders will emerge and whoever emerges at any given period should be fairly given the needed support to drive the change Ghana and Africa hope for. But, more importantly in leadership is the spirit in putting people first.

Rawlings has always been cautioning on this aspect and on one of his statements he said, “Whatever form of government we adopt as a people to suit our peculiar circumstances, our basic tenet is our common yearning and concern for every individual; for politics, whatever its colour, must be an avenue to serve our fellowmen.”

The writer Dr Donald Cog Senanu Agumenu is a Leadership and Governance expert.