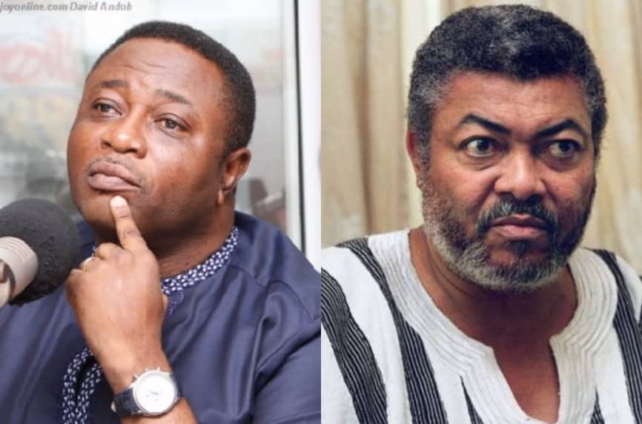 A National Democratic Congress (NDC) bigwig, Elvis Afriyie Ankrah, has revealed that his rapport with the founder of the party became sour after John Mahama became the NDC’s running mate in 2008.

According to Elvis Afriyie Ankrah, the rift was because Rawlings felt deceived by the announcement of John Mahama as Prof J. E.A Mill’s running mate.

The aspiring General Secretary in an interview with Evans Mensah on PM Express on Monday said he explained that Rawlings did not anticipate the said announcement.

Recounting the incident, he said prior to the announcement of the NDC’s 2008 running mate, people likely Betty Mould Iddirsu were widely touted as favourites for the job.

As a result, when Mahama was named, Rawlings became displeased about what he suspected to be a deliberate orchestration to keep him in the dark.

“I announced him (John Mahama) as running mate, even though at that time, my mentor, Rawlings wasn’t happy about that. In fact, we didn’t speak for about three years after that. [Due] to the circumstances, he thought that we dribbled him. Indeed we dribbled him”, he disclosed.

Mr Afriyie Ankrah also added that after this incident, his rapport with the former head of state experienced another dip, during the latter part of Rawlings’ life.

He said his latter disagreements with Rawlings were because of Rawlings’ cordial rapport with President Akufo-Addo of the New Patriotic Party (NPP).

The former NDC appointee made these revelations while commenting on his relationship with the various groups in the party, ahead of his plans of becoming the NDC’s next General Secretary.

He however stated that despite his clashes with former President Rawlings, he is still on good terms with the ‘Rawlings faction’, as well as other caucuses with the National Democratic.

Mr Afriyie Ankrah, therefore, expressed optimism about his chances and reiterated his commitment to helping the NDC win the 2024 general election.

This brings to two, the number of leading persons seeking to take over from Johnson Asiedu Nketia, who is rumoured to be nursing an ambition to become the NDC’s new National Chairman.