Donald Trump: European Union is a foe on trade 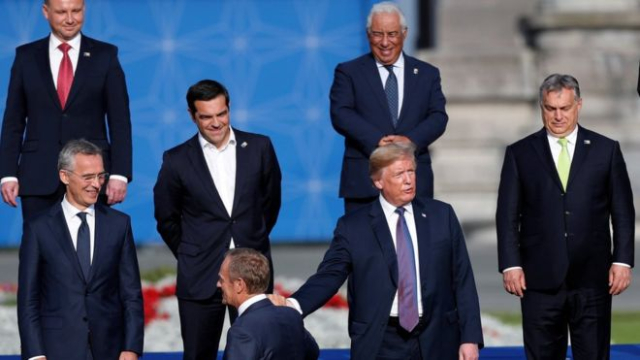 US President Donald Trump has described the European Union as a foe on trade.

He told CBS News that European countries were taking advantage of the US and not paying their Nato bills.

Mr Trump said he had "low expectations" for his meeting on Monday with Russia's Vladimir Putin, which comes after 12 Russians were indicted for alleged hackingduring 2016 US elections.

Mr Trump said he would raise this issue with Mr Putin at the summit in the Finnish capital, Helsinki, and "maybe some good" would come of it.

There have been calls in the US for Mr Trump to cancel his meeting with Mr Putin over the indictments, announced on Friday by US Deputy Attorney General Rod Rosenstein.

Sunday also saw a protest march against the summit in Helsinki. Demonstrators chanted "media must be free", and carried a banner calling for human rights.

Russia has said it is looking forward to the talks as a vehicle for improving relations.

What did Trump say about Europe?

Asked to name his biggest competitor and foe globally, the US president said there were "a lot of foes" and named Russia and China among them, but the first on his list was the EU.

Challenged by the interviewer on this, Mr Trump said the EU was "very difficult".

"In a trade sense, they've really taken advantage of us and many of those countries are in Nato and they weren't paying their bills and, you know, as an example a big problem with Germany," he said.

He then returned to the theme of Germany's reliance on Nord Stream 2, a pipeline which will increase the flow of gas to EU states and which he controversially criticised ahead of last week's Nato summit.

He said: "There's a lot of anger at the fact that Germany is paying Russia billions of dollars."

He also accused Germany of "waving a white flag".