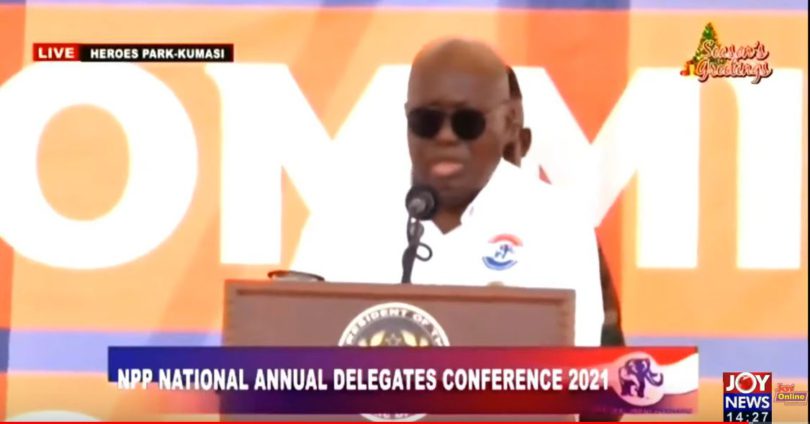 President Akufo-Addo has advised delegates of the New Patriotic Party (NPP) to indulge in healthy competition as the country nears the next general election.

According to him, even though the competition is necessary, it should not erode the strides made by the party towards retaining power in 2024.

“We cannot avoid competition. Competition, there will be. But let that competition help that party and not hinder the party so that we can break the 8 in 2024,” he said on Sunday.

He made these comments at the NPP National Delegates Conference on Sunday, December 19, 2021, in Kumasi.

Ahead of the next elections, the NPP is expected to select a new flagbearer in its primaries to lead the party’s campaign drive into the next polls.

Many have projected a heated contest among these, which tend to create cracks within its rank and file.

On the back of this, the President insisted that every step taken by members and delegates currently will go a long way to affect the party’s fortunes in the future.

He further explained the achievement of this feat is not out of the NPP’s reach if all and sundry rally behind whoever is agreed on to lead the party’s 2024 campaign.

“We will get a candidate that will unify us, and all of us will campaign to make that candidate the next President of the Republic in my shoes,” President Akufo-Addo added.

DISCLAIMER: The Views, Comments, Opinions, Contributions and Statements made by Readers and Contributors on this platform do not necessarily represent the views or policy of Multimedia Group Limited.
Tags:
2024 elections
Akufo-Addo
Competition
NPP National Delegate's Conference