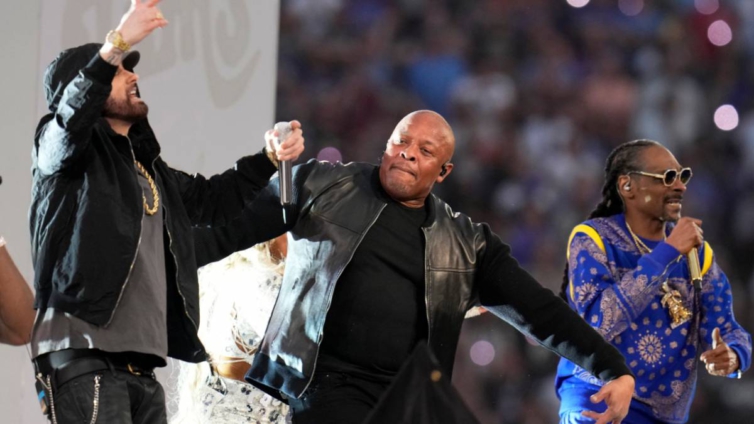 According to HipHop-N-More, Dr. Dre’s Spotify streams rose by 185% in the hour following the Los Angeles Rams’ 23-20 victory over the Cincinnati Bengals.

This includes a huge 270% increase in streams of “The Next Episode,” which opened the star-studded Hip Hop showcase, as well as a 245% jump in plays of “Still D.R.E.,” also from Dre’s multi-platinum album 2001.

Just in: some Spotify stats after the #HalfTimeShow:

Eminem’s “Lose Yourself,” which was followed by the Detroit rap icon taking the knee in support of Colin Kaepernick, also cracked the top 10 of the U.S. Spotify chart for the first time.

In October 2020, the Oscar-winning 8 Mile cut became the first rap song from the 2000s to surpass one billion streams on the platform.

.@Eminem "Lose Yourself" enters the top 10 on the US Spotify chart for the first time following the Super Bowl. It was the first 2000's hip-hop song to reach 1 billion streams.

This huge increase in streams will go some way toward compensating Dr. Dre and co., who didn’t actually get paid for performing at the Super Bowl. “We do not pay the artists,” NFL spokesperson Joanna Hunter told Forbes in 2016. “We cover expenses and production costs.”

In fact, Dr. Dre reportedly footed the bill himself and spent $7 million of his own money to fund the elaborate performance. However, as Mary J. Blige pointed out during a recent interview, the financial opportunities the Super Bowl presents are worthwhile.