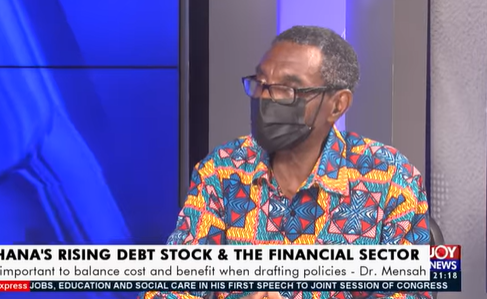 A former Technical Advisor at the Finance Ministry, Dr Sam Mensah is pushing for some drastic expenditure cuts and prudence use of public expenditure to deal with Ghana rising public debt stock.

Speaking on PM Express Business Edition on April 29, Dr Mensah noted that another way of dealing with the situation was the political will to take on public officials that have misappropriate state funds.

Dr Mensah made these comments on the topic; Ghana’s Rising Debt Stock and the Financial Sector.

Ghana debt stock has reached ¢291 billion ending December 2020. There are fears that looking at the way the country’s debt stock is rising, it could be soon be classified as a Debt Distress country when the World Bank meets this year to review the debt distress positions of its members for this year.

There have been proposals for Ghana to completely halt borrowings to check this.

But speaking on PM Express, Dr. Mensah noted that it might be difficult to that.

“How do you deal with the bonds that are maturing and other commitments that are due when you halt borrowing.

“For now we can look at how to drastically slow the rate of growth, which I understand some measures are already been taken,” he told George Wiafe.

He maintained that the situation can be controlled by ensuring that borrowing funds are advanced to investment sectors, rather than consumption.

Is revenue mobilization the solution to raising debt stock?

Dr. Mensah who served as a Technical Advisor to about four Finance Ministers from NPP and NDC noted that revenue mobilisation plays a significant role in dealing with the debt issue.

“I believe that if we improved revenue significantly that could help with Ghana debt situation,” Dr. Mensah ended.

He explained that “clearing some hard measures are needed to be taken to control the debt situation now.”

He also noted that during my engagement with all the ministers, it was clear that they were worried about our rising debt stocks and what should be done to control the situation, however, the political pressures made it difficult to some extent.

Ghana and the Eurobond Market

Some industry watchers have argued that Ghana rushed into the international capital market for borrowings after it achieved the middle income status.

Ghana in 2007 issued about $750 million, the first in the sub-region to do so. But Dr Sam Mensah rejected this arguing that it was needed because most of Ghana’s Development partners were not willing to lend to us because of our status.

Dr. Mensah noted that the amount of money that it was able to secure from the donor partners were dwindling, a development that forced government to look elsewhere.

“For instance, it took about two to three years to finalize a bilateral loan, while the Eurobond can be secured within a month or two” the former technical advisor noted.

He however rejected the argument that, Ghana rushed to borrow from the capital market.

DISCLAIMER: The Views, Comments, Opinions, Contributions and Statements made by Readers and Contributors on this platform do not necessarily represent the views or policy of Multimedia Group Limited.
Tags:
Debt stock
Dr Sam Mensah
Expenditure cuts