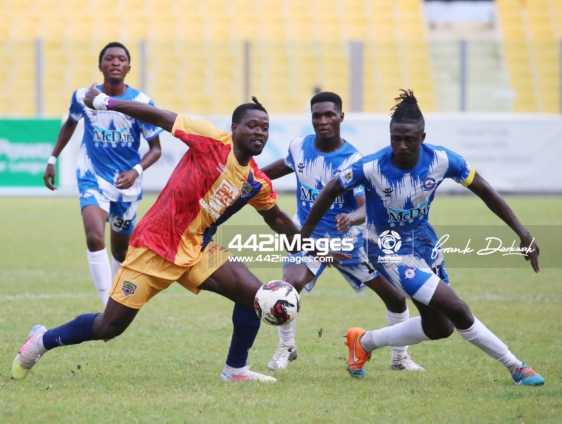 Great Olympics head coach, Yaw Preko, says his side should have secured all three points against Accra Hearts of Oak on Sunday when the two teams met in betPawa Premier League match day two.

Konadu Yiadom scored late in the game to ensure Hearts avoided a second defeat after Abdul Razak Yussif had opened the scoring eight minutes into the encounter at the Accra Sports Stadium.

In his post-match interview, Preko said his side failing to take the maximum points feels like a defeat.

“A 1-1 draw personally looks like a defeat. Because after holding them from the first whistle to the last minute feels like a defeat,” he noted.

“But we are playing away and we played against Hearts of Oak in a local derby, anything at all can happen. We take it like that, it’s a draw and we go back to work on where we fell short because this is our away match.

“We still have another match next week against King Faisal at home so we will build on the positives and we meet King Faisal.”

Olympics are now unbeaten in their last five games against Hearts in the league, winning three and drawing two during that time.

DISCLAIMER: The Views, Comments, Opinions, Contributions and Statements made by Readers and Contributors on this platform do not necessarily represent the views or policy of Multimedia Group Limited.
Tags:
Great Olympics
Mantse derby
Yaw Preko