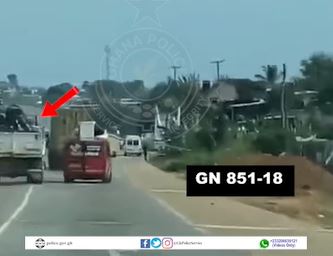 Driver of a white Volvo truck has been convicted for dangerous, careless and inconsiderate driving on the Accra-Kumasi highway (N6) at the Suhum inter-change approach.

The accused, Kwame Owusu, was arraigned on Thursday, March 17, after being arrested on Tuesday, March 15.

The Police disclosed this in a Facebook post while announcing its commitment to fighting crime in the country.

Meanwhile, the Police have entreated motorists “to comply with the rules of the road, particularly, safe selection of lanes, maintenance of appropriate following distances, indication of traffic indicator light in advance, at least, 30 meters at all times before turnings, and avoid excessive speeding on our roads.”

Motorists found breaching the traffic and road safety regulations will be arrested and prosecuted according to the Police.