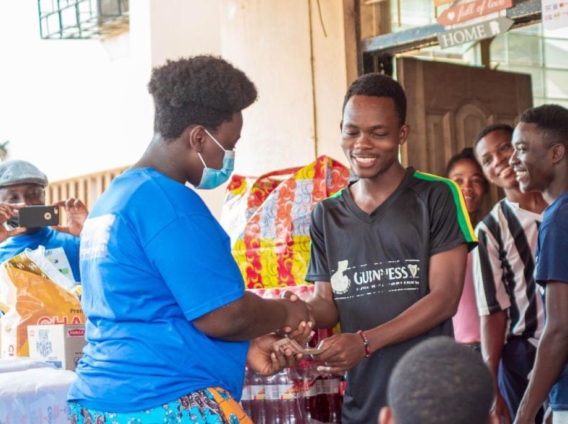 The Duo Concept Foundation has embarked on visits to donate clothing items, food and toiletries to selected orphanages in Accra.

The operations manager of foundation spoke about the need for children in orphanages to get equal opportunities in Oder to prepare them for the future.

The children at the glorious life orphanage recounted their reasons for gratitude to God and their carers and expressed the hope that their future will be a lot brighter than their present situations.

One of the founding members of the Duo Concept Foundation, Panin Acheampong, speaking to the founding father of the Nungua orphanage, said the aim of the foundation is to ensure that children in less privileged positions are given the basic needs or necessities of life.

The Otinnor Mantse who is also the founding father of the Nungua Orphanage lauded the efforts of the Duo Concept Foundation, making reference to the biblical quotation that givers never lack and that no amount of donation to a worthy cause is too small.

The Nungua orphanage has a total of ninety two children, some with physical and mental challenges. These children are taken care of single handedly by the orphanage with occasional help from donors and philanthropists.

The Duo Concept Foundation was set up in 2012 with the ultimate aim of ensuring that children’s rights are strictly enforced.

Engagements with policy makers and influencers by the foundation over the years, have resulted in academic scholarships and other donations to children in some orphanages in Accra.

The Foundation intends to embark on peer mentorship programmes for preteens in the orphanages.