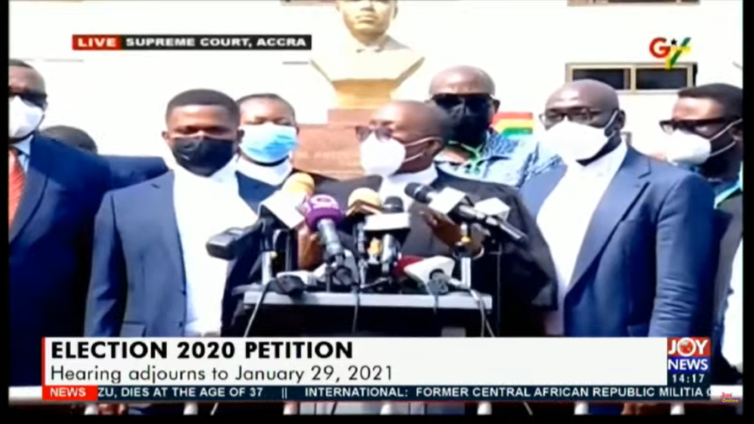 The legal team of the John Dramani Mahama has expressed disbelief on the Electoral Commission’s decision not to take the witness stand in the ongoing election petition.

This was after lawyers for the EC and President Akufo-Addo had indicated that they do not intend to open their defence or call witnesses.

Initially, the defendants had indicated that they will call one witness each but following Rojo Mettle-Nunoo’s cross-examination during Monday’s hearing, they told the court they have rescinded that decision.

The legal team from the 1st and 2nd respondents argued that the evidence presented by the witnesses for the petitioner and from cross-examination does not support the reliefs being requested by Mr Mahama in the petition filed.

But interacting with the media, Spokesperson of the petitioner’s legal team, Marietta Brew Appiah-Oppong stressed that the EC Chairperson, Jean Mensa is obliged to take the witness box.

In her view, Madam Mensa has to go under oath and clarify the anomalies that have been highlighted by the petitioner.

She insisted that no one can defend the conflicting numbers in some of the regional collation sheets better than the Returning Officer of the 2020 presidential election.

“I do not know whether it is evading, running away, or whatever, but they are avoiding the cross-examination of Mr Tsikata.

“We should remember that this is the EC, which has a constitutional duty to the people. They have an obligation to account to us for our stewardship and they say they are not going to take the witness stand, well we will know how our Lordships will rule on this,” she said.

Madam Appiah-Oppong argued that the EC is a body created by the constitution, as such, it must be held accountable to Ghanaians.

“They [EC] are obliged and have a duty to respond to our questions. EC cannot hide under the human right to say they are not going to listen to us, so I respectfully disagree with her ladyship when she said, it is a human right issue,” she said.

Meanwhile, the Spokesperson of President Akufo-Addo’s legal team said the first and second respondents will not be tempted to put their witnesses in the witness box with propaganda statements such as ‘it is in the interest of Ghanaians’.

According to Kojo Oppong Nkrumah, the petitioner has failed to meet the threshold of presenting a substantive case to the court, hence, their witnesses do not have any questions to answer to.

He took a jibe at the petitioner and his legal team that “they have lost the battle” hence they have resorted to “propaganda” adding that, “this is a court of law and not a court of public opinion.”

“You have come to court with a specific petition and the onus of proof is on you the petitioner to show to the court that this is the basic case and therefore, somebody has a question to answer.

“In the 2013 election petition, the Electoral Commission Chairperson then mounted the witness box because the petitioner came to court with pink sheets of about 11, 000 polling stations and to made an argument that when you deal with the lack of signatures, the multiple serial numbers etc. which are all in fractions, and you strike them out, you will have to call a proper declaration that Nana Addo Dankwa Akufo-Addo won the 2012 election”.

Addressing the press, he stated: “You have been here, and you have heard the bench asking the petitioner over and over again that; ‘Where are the numbers? and time and time again they made the point that it is not relevant to their petition. And that they are not here looking for new numbers or new declaration but they are in court to question the conduct of the EC Chairperson”.

DISCLAIMER: The Views, Comments, Opinions, Contributions and Statements made by Readers and Contributors on this platform do not necessarily represent the views or policy of Multimedia Group Limited.
Tags:
Election Petition 2020
Electoral Commission
Jean Mensa
Marietta Brew Appiah-Oppong