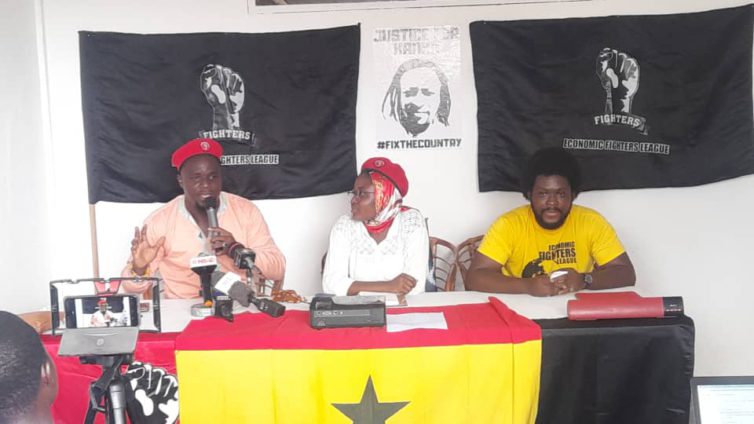 The Economic Fighters League has announced that it will be joining the FixTheCountry Movement in a demonstration against the 2022 budget on Friday, November 26, 2021.

According to the group, the budget presents “no hope for the people of Ghana.”

Addressing a press conference on Monday, November 22, 2021, National Spokesperson for the group, Nii Aryee Opare, said that the policies in the budget “will exacerbate the plight of the ordinary man and increase the hardship on us.”

“We reject the attempt to pile up hardship on the people and deny them the right in pursuit of happiness. We are together with the conveners of the FixTheCountry campaign scheduled to have a massive demonstration for Friday 26th November,” he said.

“There will be a massive demonstration to the Parliament House to tell the parliamentarians to their faces that we the citizens of Ghana, on whose authority they sit and take ex-gratia, are instructing them to reject the 2022 budget.

Nii Aryee Opare called on the youth to “show up for this demonstration as this affects each and every one of us.”

Friday’s protest is expected to begin from the Tema Station in Accra, near the National Hockey Stadium, after which the protestors will head to the precincts of Parliament House.

Conveners of the FixTheCountry Movement have said that certain aspects of the 2022 budget, which was presented by the Finance Minister, Ken Ofori-Atta on Wednesday, November 17, are inherently “ridiculous”

They further said the 2022 Budget smacks of “purposeful deceit” and “the absence of truth and genuine accountability.”

“The protest is to register our displeasure at the ridiculous proposals of the 2022 Budget and demand Parliament not to approve the Budget in its current form,” a statement from the FixTheCountry conveners said.

The Police has already been informed about the impending protest and have scheduled to meet conveners of the FixTheCountry Movement on Monday, November 22, 2021.

DISCLAIMER: The Views, Comments, Opinions, Contributions and Statements made by Readers and Contributors on this platform do not necessarily represent the views or policy of Multimedia Group Limited.
Tags:
2022 Budget and Economic Planning
Economic Fighters League
FixTheCountry Movement