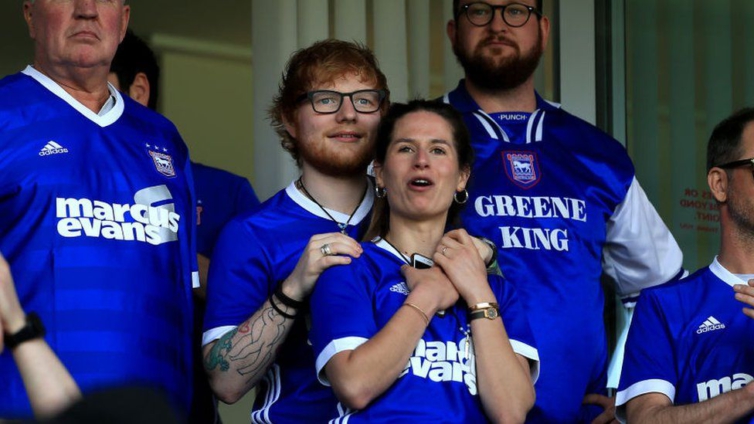 Ed Sheeran, pictured with his wife Cherry, has been a regular visitor to Portman Road

Ed Sheeran has been named as the new shirt sponsor for Ipswich Town Football Club.

The singer, who lives in Suffolk and is a Tractor Boys fan, has signed a one-year deal to sponsor the shirts of the men’s and women’s first-teams.

The mysterious logo on the shirts features mathematical symbols and the word “tour”.

Sheeran said: “The football club is a big part of the local community and this is my way of showing my support.”

He added: “I have always enjoyed my trips to Portman Road and I’m looking forward to going back there as soon as supporters are allowed into stadiums again.

“With the new owners from the US coming in, there are sure to be exciting times ahead for Ipswich fans, including myself.”

Asked what the logo on the front of the shirt means, he added: “All will be revealed in time.”

Sheeran has a long-standing affinity with Ipswich and Suffolk in general.

The Shape of You star’s record-breaking Divide tour concluded in front of 160,000 people over four nights at Chantry Park, Ipswich, in August 2019 – with a special Ipswich Town shirt sold to mark the event.

Last year, the pop star made a “significant” donation to a children’s ward of Ipswich Hospital.

Town’s director of sales, Rosie Richardson, said: “We are obviously thrilled that Ed has agreed to become our shirt sponsor next season.

“I have worked with Ed and his management team on various initiatives over the years and welcomed Ed and his guests to Portman Road for many games.

“He has shown his support for his hometown in lots of ways and this is another example of that.

“We look forward to seeing Ed – and every other supporter – back at Portman Road next season.”

The club’s previous deal with Magical Vegas resulted in some Town fans reacting angrily as they opposed a deal with a betting firm.

Last year it was announced Magical Vegas would no longer feature on the club shirts as the company had gifted its sponsorship to the Carers Trust charity, which appeared instead.

DISCLAIMER: The Views, Comments, Opinions, Contributions and Statements made by Readers and Contributors on this platform do not necessarily represent the views or policy of Multimedia Group Limited.
Tags:
Ed Sheeran
ipswich town