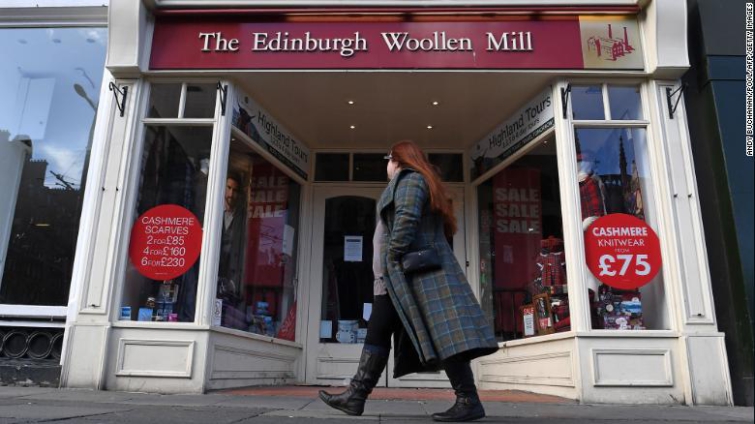 The owner of Edinburgh Woollen Mill, the Scottish heritage brand that makes Harris Tweed coats and cashmere sweaters, has warned of major job cuts as it struggles to save the business from collapse.

EWM Group, owned by retail entrepreneur Philip Day, said in a statement that it plans to appoint administrators to restructure the company, which also owns the Peacocks and Jaeger clothing brands. It is considering selling parts of the group, which employs 24,000 people.

“We have applied to court today for a short breathing space to assess our options before moving to appoint administrators,” said CEO Steve Simpson. “There will inevitably be significant cuts and closures as we work our way through this,” he added.

British companies facing insolvency can appoint administrators to provide protection against creditors. But it means handing over control to the administrators, and the process can lead to the business being closed down.

EWM is the latest UK retailer to embark on a major restructuring, as the pandemic crushes clothing sales and accelerates a shift to e-commerce that was already hurting physical stores. Marks & Spencer (MAKSY), TM Lewin, Harrods, Topshop owner Arcadia and Walgreens (WBA)-owned pharmacy chain Boots have announced up to 12,800 layoffs between them.

Even Selfridges has been forced to retrench, announcing 450 job cuts in July.

These cuts were announced before local lockdowns and a second wave of coronavirus hit Britain’s malls and main streets, highlighting the uncertain prospects that retail workers face.

Data published Friday showed that Britain’s economic recovery was stalling even before the fresh surge in infections. UK GDP grew by 2.1% in August, less than half the rate economists were expecting.

Edinburgh Woollen Mill is in a particularly tough position because many of its stores are in the north of Britain, where restrictions have been tightened more than elsewhere.

Its customers also tend to be older, according to Patrick O’Brien, head of UK retail research at GlobalData.

“Any retailer focused on getting older shoppers into physical stores is going to struggle to survive,” O’Brien said on Twitter on Friday.

EWM Group said it is also having to contend with “false rumors” relating to its business practices, which it said have impacted its credit insurance agreements andhurt its finances.

The company has been accused by suppliers in Bangladesh of not paying for goods, according to UK media reports. It denies the claims.

“The reduction in credit insurance, against the backdrop of the initial lockdown, current local lockdowns, and the second wave of Covid-19 reducing footfall have made normal trading impossible,” Simpson said.

DISCLAIMER: The Views, Comments, Opinions, Contributions and Statements made by Readers and Contributors on this platform do not necessarily represent the views or policy of Multimedia Group Limited.
Tags:
Edinburgh Woollen Mill
Fashion
Philip Edward Day
UK