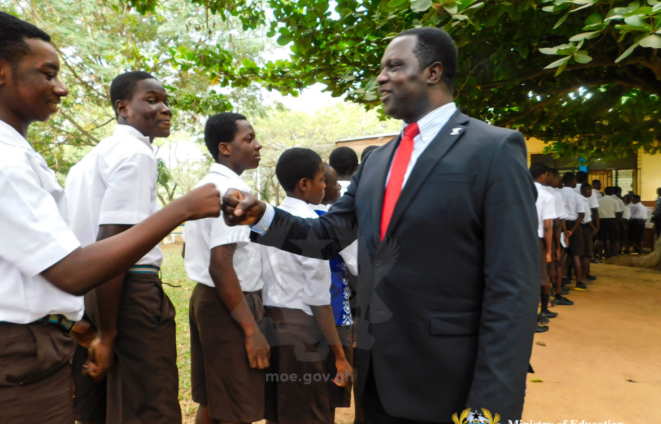 The Deputy Education Minister in charge of basic and secondary levels says the reopening of schools and the management of the education system amid the pandemic is a difficult territory to navigate.

“Managing the education system in the COVID-19 era is not an easy thing. Anybody who wants the easy way out would simply say, ‘I’m not opening schools’”, he said on the Super Morning Show, Wednesday.

Since the president announced the reopening of schools to final year students in Junior High, Senior High schools and tertiary institutions, there have been several criticisms on why students should not return as well as responses given by various government officials.

While, some schools have reported confirmed cases of COVID-19 among students and staff since schools reopened.

Despite the backlash on the government’s decision, the Deputy Education Minister insists that schools for final year students remain open because he says it is the way forward.

But Dr Osei Adutwum has explained that if final year students do not return to school to finish their exams, there can be no plan to have the rest of the student body from kingardeten and upwards to return to schools.

“We haven’t fully opened schools in Ghana but there is a need for us to at least have those who are in their final years. We have to give them the opportunity to finish their exams and after that plan how we will bring the younger ones from the KG up,” he said.

Dr Osei Adutwum stressed that to achieve the reopening of the rest of the schools, government’s decision to reopen schools considered the fact that universities and secondary schools had to find a way to ensure final year transition.

He also explained that the world including Ghana is at a point where education must pick up from where it left off because it contributes to the development of the economy.

According to him, research has shown the importance of education to socio-economic transformation.

“It has now been confirmed by economists, educationists around the world that we need to find a way to have some form of education and finding that way in the Covid-19 era takes a lot of courage.”

DISCLAIMER: The Views, Comments, Opinions, Contributions and Statements made by Readers and Contributors on this platform do not necessarily represent the views or policy of Multimedia Group Limited.
Tags:
Covid-19
Dr Yaw Adutwum
Reopening of schools