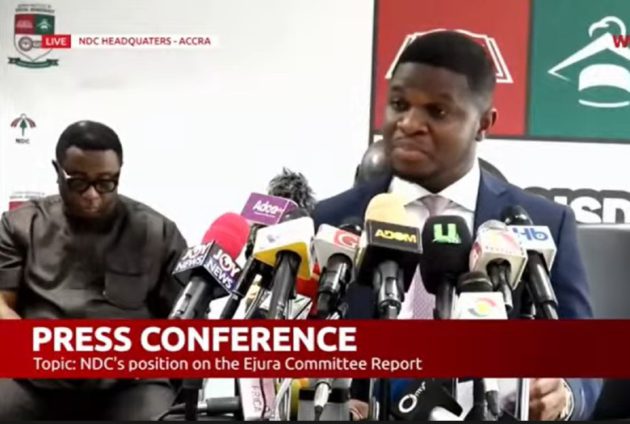 The National Democratic Congress (NDC) has stated that the Ministerial Committee set up to investigate the Ejura protest should have recommended the dismissal or demotion of the Ejura District Police Commander.

According to the party, it was DSP Philip Kojo Hammond’s reckless conduct that provoked the Ejura disturbances and triggered the shootings and killings on June 29, 2021.

Thus, the recommendation made for his transfer is insufficient and ridiculous, the Communications Officer, Sammy Gyamfi said at a press conference, on Tuesday.

He said that “in fact, it’s an insult to the sensibilities of the affected people and their families. Transferring a Police Officer to another station in the same capacity and rank can never constitute disciplinary action.”

“We in the NDC hold the view that the committee should have recommended a more punitive and deterrent sanction such as demotion or even dismissal of the Ejura District Police Commander,” the Communications Officer added.

Among other things, the committee recommended the immediate transfer of the Ejura District Police Commander.

The 55-page report said Deputy Superintendent of Police (DSP) Philip Kojo Hammond should be transferred for incompetence and the fact that his relationship with the community had been damaged beyond repair.

However, Sammy Gyamfi stated that a transfer of a police officer from one post to another is a routine exercise for the security agency and thus cannot constitute disciplinary action.

“How on earth can a mere administrative transfer which has been touted as routine exercises of the security agencies, be recommended as punishment for a senior Police Officer whose unprofessional and reckless conduct has caused the death of two Ghanaians and injuries to many?”

Tags:
Ejura probe
NDC
The National Democratic Congress (NDC) says the Ministerial Committee set up to investigate the Ejura protest should have recommended the dismissal or demotion of the Ejura District Police Commander.