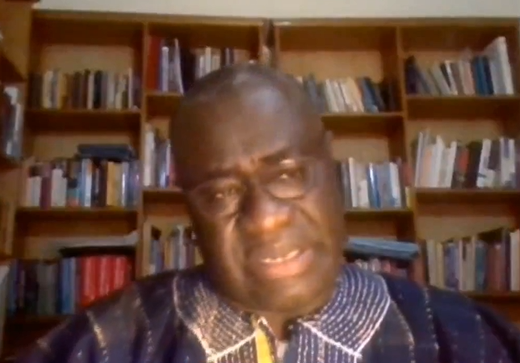 Director for Faculty of Academic Affairs & Research at the Kofi Annan International Peacekeeping Training Centre (KAIPTC), Prof. Kwesi Aning, has lauded the Justice Koomson Committee established to probe the Ejura incident that led to the loss of two lives on June 29, for its commendable recommendations.

Speaking on JoyNews‘ PM Express, he noted that the three-member Committee set up by the Interior Minister made the right call by making public its findings.

Some recommendations he said will not cost the country anything if implemented by the government.

“First, I think that releasing the report was useful and I argue that it is good for the government, it is good for the people of Ghana. I think the generality of the conclusion and recommendations are very satisfactory. They are down to earth, sensible, implementable.

Despite these achievements by the Committee, Prof Aning stated that he was concerned about the implementation of 10 recommendations presented to the government.

Interacting with Evans Mensah on Tuesday, he feared that the Committee’s recommendations may be taken for granted, and the unfortunate incident at Ejura may recur.

“Now the real issue is how do we get the recommendations to be implemented.

“I am hoping for the sake of this country that the recommendations are implemented because Ejura irrespective of the denial by the police that the underpinning tension in Ejura is not reflective of what is happening in this country. I believe that responding to the recommendations in a manner that assuages the hurt of the family, reconciles the community and rebuilds institutional processes around intelligence gathering, analysis will help all of us. We should use these institutional interviews and lessons learnt from Ejura to ensure it doesn’t repeat itself,” he said.

He agreed to submissions made earlier by a member of the Committee, Security Expert, Dr Vladimir Antwi Danso, who stated that it is not the mandate of the Committee to ensure its recommendations are implemented, but that of the general public.

“Vladimir’s point is very clear. They were given a job to do and they have done it. It is up to government to implement them. It is up to the Ghanaian public to ensure that their democratically elected government implements the recommendations,” Prof Aning averred.

Although the Director for Faculty of Academic Affairs & Research at the Kofi Annan International Peacekeeping Training Centre has applauded the works of the Committee, he hinted that attributing the cause of death of Ibrahim Mohammed to a family feud was least expected.

“I’ve also argued the point that Kaaka’s death resulted from a family feud, I find it quite difficult to accept. I don’t know all the evidence that were presented before the Committee, but that has come to me as a surprise,” he stated.

As part of its 10 recommendations to government, the Justice Koomson Committee recommended that there should be adequate compensation for the families of the two deceased persons, namely, Abdul Nasir Yusif and Murtala Suraj Mohammed as well as those injured on June 29.

The removal of the Ejura-Sekyedumase Municipal Chief Executive, Honourable Mohammed Salisu Bamba was also recommended by the Committee.

DISCLAIMER: The Views, Comments, Opinions, Contributions and Statements made by Readers and Contributors on this platform do not necessarily represent the views or policy of Multimedia Group Limited.
Tags:
Ejura
Prof. Aning