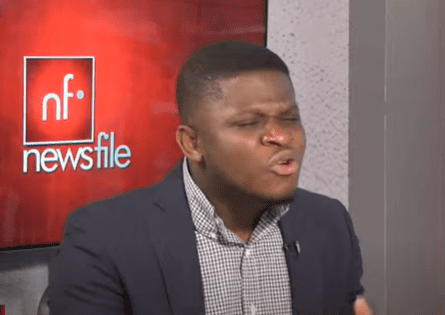 The Communications Officer of the National Democratic Congress (NDC), Sammy Gyamfi has condemned the report of the three-member Committee established by the Interior Minister to probe into the deaths of two residents in Ejura during a protest that turned chaotic on June 29.

Mr Gyamfi, while interacting with Samson Lardy Anyenini on Newsfile, on Saturday, described the report as “a cocktail of faulty findings and deficient recommendations.”

This, he said, is due to an attempt by the Justice Koomson Committee to cover up the identity of the individuals whose actions led to the loss of lives and injuries in Ejura.

Mr Sammy Gyamfi disagreed with the Committee’s conclusion that social activist Ibrahim Mohammed, aka, Kaaka probably lost his life due to a family feud and not for his role as a social activist.

He explained that interactions with the bereaved family showed a family that existed in peace, hence such a statement could only be false, particularly when there was no such evidence presented by the Committee in it’s report.

“The first problem I have and that for me is the most important finding, has to do with the circumstances surrounding the death of Macho Kaaka. The Committee says we think that it is more probable based on the facts available to us that Kaaka was killed as a result of a family feud and not as a result of his social activism. That is a bare-faced lie and cannot be true. Firstly, there was no evidence of any family feud in the Kaaka family before the Committee. There was no such evidence.

“I have been on the ground, interacted with the wife, mother of Kaaka and his brother, Iddi. They were at peace with each other as brothers when Kaaka was alive. His elder brother, Iddi, was even helping to take care of the children of kaaka. They have a very strong bond as brothers, they live in peace and love.

“What we do know was Kaaka was a staunch member of the New Patriotic Party supported a candidate against the former MCE of Ejura, Salisu Bamba during the NPP internal primaries and as a result of that contest, he became the target of several threats on his life. Some of these findings were captured in the Committee’s report. Kaaka himself recorded a video in which he testified that his life was under threat and that if he was killed, the MCE should be held responsible,” he stated.

The Justice Koomson Committee stated in its report that, “We accordingly find that the death of Kaaka was not directly linked to his social media activism”.

The Senior Vice President of IMANI-Africa, Kofi Bentil, who was also a panelist on the Show, shared a similar concern. He intimated that such a statement from the Committee, goes to affirm that “It has was set up to find a narrative to support a preset conclusion.”

“It will be very difficult for you to convince me that the murder of a person like Kaaka, where there was evidence as in a body, where there were witnesses, people said they saw somebody drag somebody, where there was previous to that murder, threats that were reported to the police. You can’t convince me that, that is the kind of murder which is so difficult to investigate. We have not been able to find how it happened and understand anything and we have more or less just concluded that it could have been and it is this or that,” he added.

Meanwhile, the NDC Communications Officer is of the view that a great injustice has been meted out to the family of the slain activist.

He explained that the testimony of one Sadia Fuseini, a resident of Ejura, who initially informed the Police she saw two men struck down Kaaka with a stick but later changed her statement that it was Baba Iddi instead, which led to his arrest, has been upheld by the Committee despite the contrasting accounts.

“Who were the two people who were first arrested when Kaaka was killed. It was Ibrahim Saaka and Fuseini Alhassan, both of whom are close associates of the Ejura MCE, Salisu Bamba. Why were they arrested? They were arrested because Sadia Fuseini, the co-tenant of Kaaka and his wife when the incident happened first testified to the Police that she saw two people holding two sticks. That is why they saw two sticks at the crime scene. If you know Iddi, that feeble guy could not hold two big sticks to commit that crime. Then after that the lady goes to the Police station to change her testimony that it wasn’t two people I saw, I saw his brother and without adducing any evidence, they arrest his brother.

“It is the word of this Sadia Fuseini who has changed her testimony twice but which the Committee failed to consider in their investigations, that the Committee has accepted hook-line and sinker to make the conclusion that Kaaka was killed as a result of a family feud.”

Mr. Gyamfi therefore concluded that, “they have done a grave injustice to the family of Kaaka and the people of Ejura.”